Abbey Assaroe was founded in 1178 and completed in 1184 by the Cistercians monks who came to it from Boyle in County Roscommon.  It was dedicated it to God and St. Bernard by Flaharty O'Muldorry, Lord of Tirconaill (Donegal) and it seems he was patron of the abbey at this time.  Flaharty died there in 1197 at the age of 59.  In 1227 the abbot of Assaroe was involved in the conspiracy of Mellifont (1216-1228).  Donal Mor O'Donnell, King of Tirconaill became a monk at the monastery.  He died there in 1241 and was buried in the grounds of the monastery.

The monastery was burnt in 1377 and John O'Donnell and his son were slaine there in 1380.  The abbey suffered many attacks over the following number of years culminating in it being plundered in 1398 by Niall Og O'Neill, the King of Tyrone.  The abbey estates were granted out to English lords but the monks continued to reside in the abbey.  The monks lived on there in this fashion until after the Flight of the Earls in 1607 when the last of the monks were driven out of the abbey.  It fell into decline in the 17th century and now all that remains of the abbey is the west end of the church, part of the west gable and a section of the south wall.  As you are facing the ruins you will see a newer graveyard to your left.  This, together with an adjoining farm, would have formed part of the abbey grounds.  The last abbot of the abbey, Abbot Quinn is buried in the old graveyard there.

Location: Take the Rossnowlagh road out of Ballyshannon.  A short distance along the road you will see a small bridge with a green plaque indicating where the abbey stood. 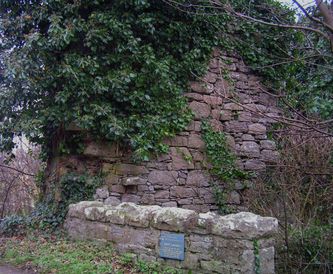 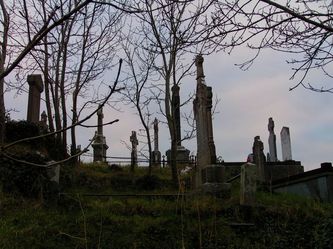 Gray, gray is Abbey Assaroe, by Belashanny town,
It has neither door nor window, the walls are broken down;
The carven-stones lie scatter'd in briar and nettle-bed!
The only feet are those that come at burial of the dead.
A little rocky rivulet runs murmuring to the tide,
Singing a song of ancient days, in sorrow, not in pride;
The boortree and the lightsome ash across the portal grow,
And heaven itself is now the roof of Abbey Assaroe.

It looks beyond the harbour-stream to Gulban mountain blue;
It hears the voice of Erna's fall - Atlantic breakers too;
High ships go sailing past it; the sturdy clank of oars
Brings in the salmon-boat to haul a net upon the shores;
And this way to his home-creek, when the summer day is done,
Slow sculls the weary fisherman across the setting sun;
While green with corn is Sheegus Hill, his cottage white below;
But gray at every season is Abbey Assaroe.

There stood one day a poor old man above its broken bridge;
He heard no running rivulet, he saw no mountain-ridge;
He turn'd his back on Sheegus Hill, and view'd with misty sight
The Abbey walls, the burial-ground with crosses ghostly white;
Under a weary weight of years he bow'd upon his staff,
Perusing in the present time the former's epitaph;
For, gray and wasted like the walls, a figure full of woe,
This man was of the blood of them who founded Assaroe.

From Derry to Bundrowas Tower, Tirconnell broad was theirs;
Spearmen and plunder, bards and wine, and holy Abbot's prayers;
With chanting always in the house which they had builded high
To God and to Saint Bernard - where at last they came to die.
At worst, no workhouse grave for him! the ruins of his race
Shall rest among the ruin'd stones of this their saintly place.
The fond old man was weeping; and tremulous and slow
Along the rough and crooked lane he crept from Assaroe.