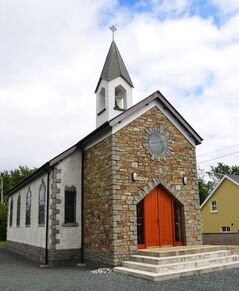 All Saints Church Portsalon
This small Church of Ireland sits at Croaghross, Drum, Portsalon on the Fanad peninsula and it houses the bell from "The Laurentic" which sunk after hitting two German mines off the coast of Ireland in 1917.

From their website, clondevaddock.derry.anglican.org:
"All Saints Church, Portsalon was originally a tin structure built in 1912.  This was very badly damaged by “Hurricane Debbie” on September 16th, 1961. The church was rebuilt and re-opened in 1963.   Today it has a beautiful set of stained glass windows and contains the only pipe organ in Fanad. The bell from the sunken ship, “The Laurentic” (1917), hangs here. The windows add a particular charm to this church. They were designed by the H.W. Clokey Studio in Belfast, under the general guidance of Mr. W. Roworth, the attending architect and the incumbent, Rev. G. A. McDonald.”

From gloine.ie:
"BRIEF ARCHITECTURAL DESCRIPTION
Iron building, 1912, damaged in storm, 1961. Chancel and nave, 1963, by W.L. Roworth. Triangular-headed fenestration. Furnishings from the original building. Bellcote houses bell salvaged from RMS Laurentic, 1917."  This website has photographs of the stained glass windows in the church and you can view them HERE.