Ballaun stones are, according to a paper written by Liam Price in 1959 and quoted in the book ‘Archaeological Survey of County Donegal (Brian Lacey), “normally found in one of three associations: with Bronze Age cua-and-circle decoration; with early ecclesiastical sites and in farmyards where they are believed to have been used for bruising or crushing animal feed-stuffs in the recent past.”  And later in that chapter: “They are occasionally claimed as baptismal fonts but more usually interpreted as mortars.”

The book lists a number of such stones in Donegal and we have so far managed to photograph a number of them, including one not listed in that book.

As with many historic (and/or scenic) sites, they maybe on private land and therefore permission to access the land must be sought before entering. 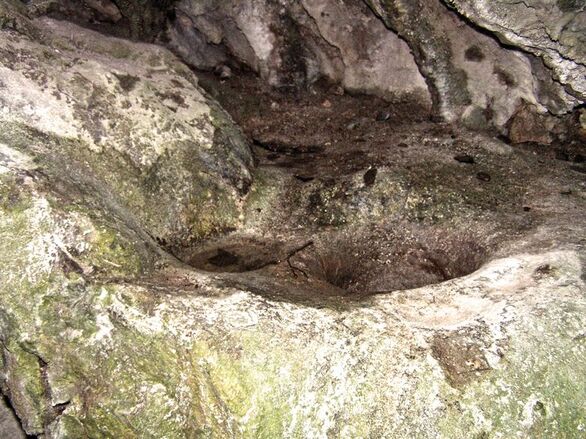 The ballaun stone at Abbeylands is inside Catsby Cave where in penal times Mass was celebrated away from those who would kill people for celebrating their faith.

There are two indentations in that stone with one being for Holy water and the other, Blessed Salt.

​To read more about Catsby Cave and view more of our photographs taken there, click Catsby Cave & St. Parick's Well

This one we would probably never have found but for the great help of a local man there who took us to it.  It is more or less hidden behind hedges and bushes and not visible from the road and with no indication to tell the passer-by it is there.
​
It is known locally as St. Colmcille’s Footprints and you can see when you not the indentations there. 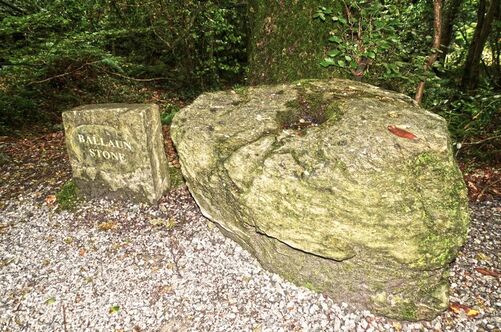 This ballaun stone is now not accessible since the beautiful woodland of Gortletteragh is now closed to the public.  Luckily for us we were there in 2016 and got photographs of the ballaun stone there.

It sits near a Mass Rock and the site where a priest was murdered in penal times and thrown into a hole there ('The Murder Hole').
​
There are of course many more ballaun stones scattered throughout Donegal and as we happen upon them and photograph them we will add them here.

If you have any information and or photographs of one in Donegal, please contact us using the link to the CONTACT form below.