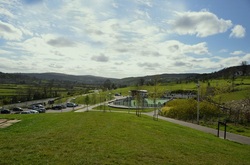 Ballymacool Town Park, Letterkenny
Ballymacool Park in Letterkenny is situated on the outskirts of Letterkenny on the Churchill road just across from St. Eunan's G.A.A. grounds (O'Donnell Park).  It was opened on the 24th of May 2009 by Councilor Victor Fisher.

The park covers some 20 acres and is the largest park in Letterkenny.  Work on it commenced in 2007 and the final cost of the park was nearly four million euro.

There are various asphalt paths through the park and a number of gardens.  There are seats and pcinic benches, a childrens playground, bicycle lanes and a hard surfaced basketball and football section.

There are man-made mounds, now grass covered, formed to create gently rising hills throughout the park.  Atop one of these is a sculpture made up of two standing stones on which there are various carvings.  The plaque there reads:

"The above sculpture was funded by border action, Peace 2 extension funding to Donegal Youth Service as part of the Donegal Based Youth Consortium.

It was created by 60 young people from youth clubs and projects across Donegal in 2009 under the supervision of local Sculptor Redmond Herrity from the Letterkenny Sculpture Centre.  The idea for this sculpture was inspired by the symbols on "The History of Ireland ring".

The young people chose the symbols and carved them in stone to represent Ireland in the past, present and future.  Each panel represents an epoch of Irish history with the question mark representing the pre-historical part of Ireland.  The panels the move through Irish history with representations of St. Patrick, the great monasteries, the arrival of the Vikings, the Anglo Norman invasion, The Flight of The Earls, the Act of Union and the partition of Ireland.

The standing stones are a homage to the earliest architects of Ireland.  The symbols were carved in positive relief and then in negative relief to create the illusion that the stone was split and that the history of Ireland had always been present within the stone and was only waiting to be revealed.


The sandstone for this sculpture is taken from the same quarry that supplied materials for St. Eunan's Cathedral in the 1800s.  From certain viewpoints the Cathedral appears framed by the stones."

Click on any of the photographs below to enlarge and scroll down for a google map. 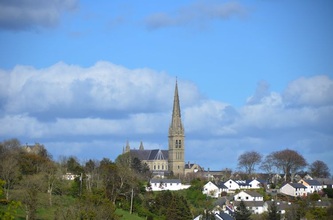 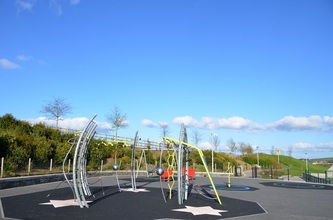 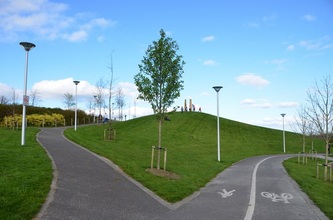 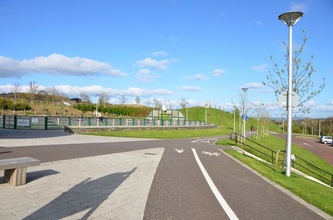 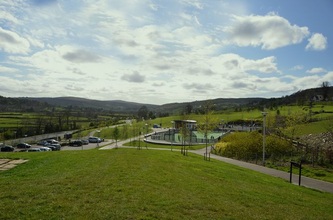 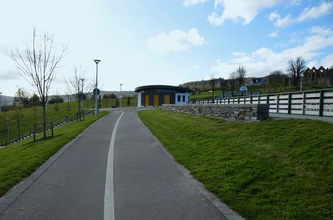 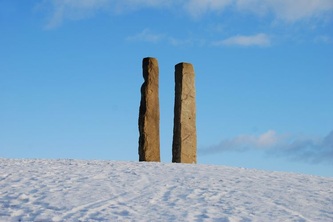 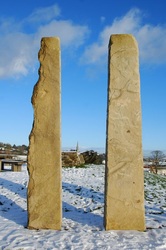 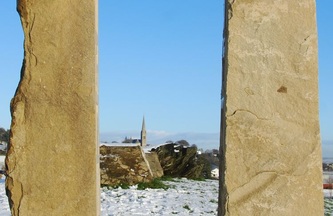 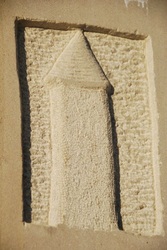 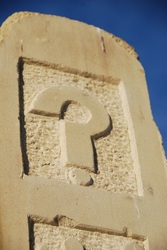 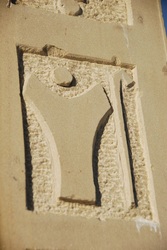