BALLYSHANNON ~ Population approximately 2,300
Béal Átha Seanaidh ~ meaning "The Mouth of Seannach's Ford"
(Seannach was a 5th century warrior who was slain there). 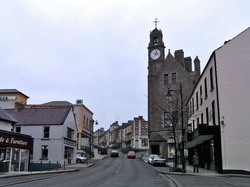 Ballyshannon in south Donegal is thought to be the oldest town in Ireland, created by Royal Charter in 1613.  There have been archaelogical sites discovered there with some dating back as far as between 4000 and 2500 BC and some of the earliest settlers in Ireland, the Parthalonians, settled on nearby Inis Saimer Island. In 1247 it was the location of 'The Battle of Ballyshannon'.
Later, in 1423, Ballyshannon was where the O'Donnell Clan settled and built a castle.

In 1775 the English aristocrat Richard Twiss wrote of Ballyshannon in his book 'A Tour in Ireland' "The next day I arrived at Ballyshannon, and was so pleased with its beautiful situation, that I remained there four days.  It is a small town, situated near the sea, with a bridge of fourteen arches, over a river (The Erne), which a little lower forms one of the most picturesque cascades I ever saw.  It is rendered still more singular and interesting by being the principal salmon-leap in Ireland."

TWINNED WITH
~ Grenay, France
~ Sene, France
FAMOUS PEOPLE BORN IN BALLYSHANNON
~ Allingham, William (1824-89) ~ Poet.  Probably his most famous work is 'The Fairies' "Up the airy mountain, Down the rushy glen, We daren't go a-hunting, For fear of little men ..."  which lines are spoken by The Tinker in Willy Wonka and the Chocolate Factory.  He died in London and his ashes were brought home to his navie Ballyshannon where they were intered in the graveyard at St. Anne's Church of Ireland in the town.  His English wife, Helen Allingham (1848-1926) was an artist and the first woman elected to the Royal Society of Watercolours.
~ Carney, Martin ~ RTE television sports pundit.
~ Conolly, William (1662-1729) ~ Attorney and politician.  He was Speaker of the Irish House of Commons and at his death, the wealthiest man in Ireland.  He married Katherine Conyngham, daughter of Sir Albert Conyngham of Mountcharles.
~ Corscadden, Hazel ~ Grandmother of Tony Blair (form
~ Dixon, Elizabeth ~ Mary Shelley's grandmother
~ Gallagher, Rory (1948-95) ~ Musician and songwriter.  Formed the band 'Taste' in the late '60s.  In 1971 he was voted (ahead of Eric Clapton) Melody Maker's International Top Musician of the Year.  His albums have sold over 30 millions copies worldwide.  He died in London after developing complications following a liver transplant.  Each year in Ballyshannon The Rory Gallagher International Tribute Festival takes place and on the 2nd of June 2010 the Rory Gallagher Bronze statue was unveiled in the town centre.  In Temple Bar, Dublin there is a place name 'Rory Gallagher Corner' and under the sign hangs a bronze replica of his Stratocaster guitar.  One of his most famous songs is probably 'Who's That Coming'.  (See below for photographs of the Rory Gallagher statue in Ballyshannon).
~ McGettigan, Charlie (b.1949) ~ Singer, Winner of the Eurovision (along with Paul Harrington) in 1994.  Their final score of 226 points was 66 points ahead of the runner-up and the highest score ever in the Eurovisiion.  Their song was Rock 'n' Roll Kids
~ Thornley Blake, Mathilda ~ Bram Stoker's mother 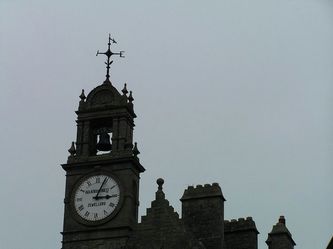 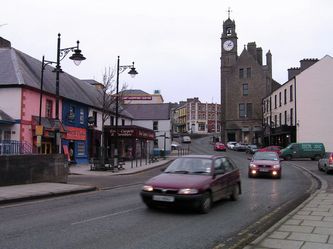 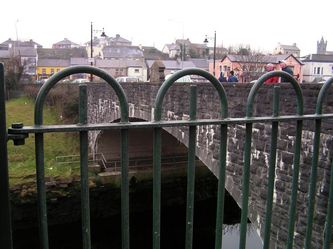 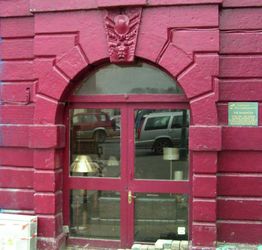 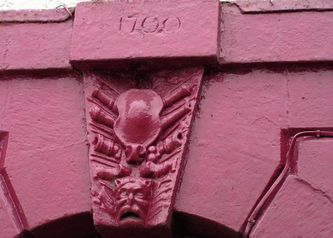 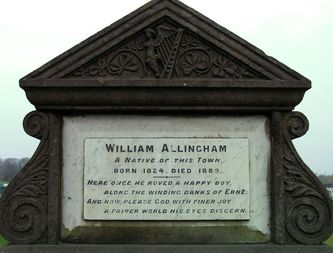 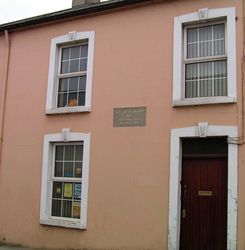 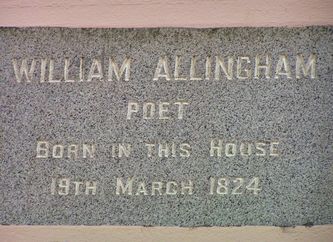 RORY GALLAGHER STATUE, BALLYSHANNON
The statue of Rory Gallagher stands in the middle of Ballyshannon.  The base of the statue reads: "Rory Gallagher 1948 ~ 1945.  'Follow Me'  "I want to plant a star in the sky, one you can find at the end of the night." " 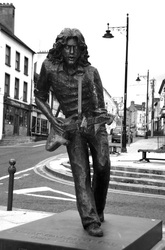 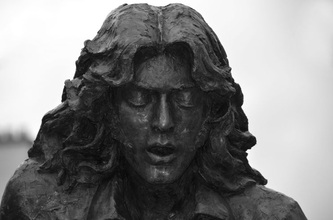 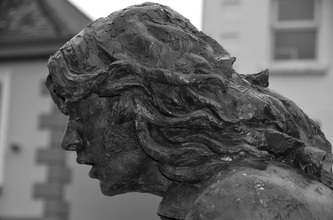 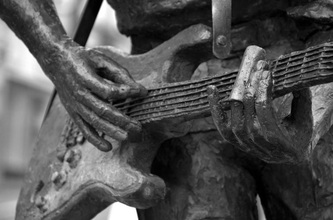 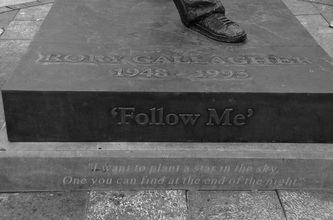