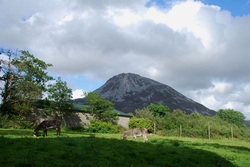 Errigal, the highest mountain in Donegal
~ Donegal is Ireland's most northerly county (of all 32 counties)

~ We have 3 peninsulae (Inishowen (the largest peninsula in Ireland), Fanad and Rosguill

~ Ballyshannon is the oldest town in Ireland

~ Tory Island, 11km/7 miles off the north coast of Donegal is the only place in Ireland which still has it's own king

~ The smallest fishing harbour in Europe can be found at Bunbeg in the Donegal Gaeltacht area of Gweedore, west Donegal

~ Donegal has won the All Ireland (GAA) Sam Maguire Cup twice: the first time in 1992 and the second in 2012
back to all things irish
back to home page