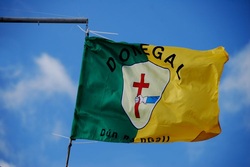 The Donegal Flag
County Donegal, covering almost 5,000 square kilometers or nearly 2,000 square miles, is one of the largest counties in Ireland (the 4th largest) and sits up on the north west coast of Ireland in the province of Ulster (Ireland has four provinces: Ulster; Connaght; Leinster; Munster).

Donegal is joined to the 26 counties of Ireland (the Republic of Ireland) by a thin strip of land in County Leitrim.  It borders three of the six counties of Northern Ireland (which are under British rule) and is the largest of the counties of the province of Ulster.
DONEGAL FACTS & TRIVIA
Donegal is Ireland's most northerly county (of all 32 counties).
~ The population of County Donegal (as of the 2011 Census) is 161,137.
~ We are the only county of the 26 counties of Ireland that borders only one other county (Leitrim) within 26 counties.
~ We border three northern Ireland counties: Tyrone, Derry, and Fermanagh.
~ We have the longest coastline in Ireland, approximately 1235 km/772 miles (which equates to nearly 20% of the coastline of Ireland).
~ We have 3 peninsulae (Inishowen (the largest peninsula in Ireland), Fanad and Rosguill.
~ Our highest mountain is Errigal (751 meters/2,464 ft).
~ Donegal has the highest seacliffs in Europe at Sliabh Liag (Slieve League).
~ Our longest river is the Erne (also the 2nd longest river in Ireland) which runs through Ballyshannon
~ Ballyshannon is the oldest town in Ireland.
~ Tory Island, 11km/7 miles off the north coast of Donegal is the only place in Ireland which still had it's own king up until the death of Patsy Dan.
~ Killybegs in south west Donegal is the largest fishing port in Ireland.
~ The smallest fishing harbour in Europe can be found at Bunbeg in the Donegal Gaeltacht area of Gweedore, west Donegal.
~ Donegal has won the All Ireland (GAA) Sam Maguire Cup twice: the first time in 1992 and the second in 2012.
~ ​Glenveagh Castle was the first property in Donegal to have central heating fitted.
FAMOUS PEOPLE BORN IN DONEGAL

~ WILLIAM ALLINGHAM (1824~89) ~ Poet.  Probably his most famous work is 'The Fairies' "Up the airy mountain, Down the rushy glen, We daren't go a-hunting, For fear of little men ..."  which lines are spoken by The Tinker in Willy Wonka and the Chocolate Factory.  He died in London and his ashes were brought home to his navie Ballyshannon where they were intered in the graveyard at St. Anne's Church of Ireland in the town.  His English wife, Helen Allingham (1848-1926) was an artist and the first woman elected to the Royal Society of Watercolours.

~ RORY GALLAGHER (1948-95) ~ Musician and songwriter, was born in Ballyshannon.  He formed the band 'Taste' in the late '60s.  In 1971 he was voted (ahead of Eric Clapton) Melody Maker's International Top Musician of the Year.  His albums have sold over 30 millions copies worldwide.  He died in London after developing complications following a liver transplant.  Each year in Ballyshannon The Rory Gallagher International Tribute Festival takes place and on the 2nd of June 2010 the Rory Gallagher Bronze statue was unveiled in the town centre.  In Temple Bar, Dublin there is a place name 'Rory Gallagher Corner' and under the sign hangs a bronze replica of his Stratocaster guitar.  One of his most famous songs is probably 'Who's That Coming'.

~ CHARLIE MCGETTIGAN (b.1949) ~ Singer/songwriter and winner of the Eurovision (along with Paul Harrington in 1994.  Their final score was 226 points which was 66 points ahead of the runner-up and the highest score ever in the Eurovision.  Their winning song was 'Rock 'n' Roll Kids'.

~ DANIEL O'DONNELL (b. 1961) ~ Singer, was born in Kincasslagh
FAMOUS PEOPLE WHOSE PARENT/S OR GRANDPARENT/S BORN IN DONEGAL

~ MARY SHELLY ~ Her grandmother, Elizabeth Dixon, was born in Donegal