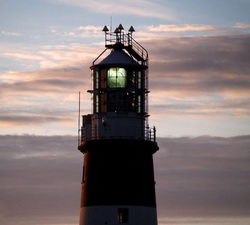 Tory Island Lighthouse
County Donegal has eleven lighthouses including Ireland's most northerly lighthouse, Inistrahull off the coast of Malin Head.

From the noth east coast of Donegal (the Inishowen peninsula) working our way around the coast of westwards and then to the southern most lighthouse of Donegal on St. John's Point, they are:

Buncrana Lighthouse
Buncrana lighthouse is situated on the pier in the town of Buncrana.

Photographs and information about Buncrana. 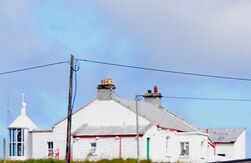 ​From IrishLights.ie: "The only lighthouse in the immediate vicinity of Lough Swilly was Fanad Head established on 17th March 1817, but in March 1871 the Duke of Abercorn, backed up numerous signatories in a memorial to the Commissioners, looked for better lighting in the Lough and suggested converting the two Martello towers at Macanish and Dunree. The Government later in the year said they had no intention of disposing of the towers. During 1872 Trinity House came over to investigate and they agreed that lights should be established at Dunree Head and on Buncrana Pier. The Board of Trade also concurred with Trinity House.

The Inspecting Committee surveyed the site and reported that the Fort at Dunree was not a suitable position for the new lighthouse but suggested a position on higher ground to the north, in which case the tower would not have to be more than one storey high.

Work went ahead and a lantern attached to a dwelling for the Keeper was designed and built and the light was established on 15th January 1876. Mr John Kennedy was the Keeper in Charge. The light was fixed, that is non flashing with a two wick burner using oil in a 500mm diameter lens.

The lantern is at ground level attached to and in front of the dwelling. The light is 46m above high water sea level. The dwelling and lantern were built by Messrs McClelland & Co. of Derry. The optic supplied by Chance Brothers of Birmingham.

The character of the light is Flashing (2) WR 5 seconds. Its range is 12 miles white and 9 miles red. Its intensity is 5,000 candelas white and 1,200 candelas red. The height of the structure is 6 metres.

On 9th December 1927 the light was converted to unwatched acetylene with a carbide generating plant attached to the station. A group of seven acetylene burners replaced the wick lamp and the fixed light became flashing with two flashes every five seconds. By virtue of the light being made unwatched meant that the keeper no longer had to keep a night watch. The keeper, J. Murphy, was pensioned and became the Attendant. The light had another conversion this time to electric in 1969. The source of illumination being a cluster of 100 watt, 220 Volt lamps. If the ESB should fail then a small electric alternator automatically takes over until the mains supply has been restored. 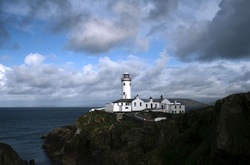 Fanad Lighthouse
Situated at the tip of the Fanad peninsula.

Inishowen Lighthouse
The Inishowen lighthouse is situated near the town of Moville and right beside the beautiful sandy beach at Shroove (sometimes spelled Shrove or Stroove). 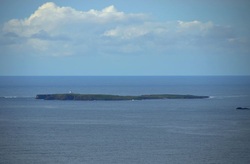 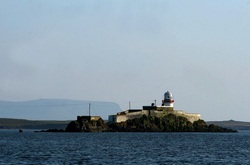 Rotten Island Lighthouse
Rotten Island lighthouse is situated on a small island at the edge of the port of Killybegs.

Photographs and information about Killybegs. 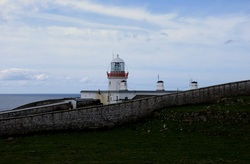 Photographs and information about St. John's Point and Dunkineely. 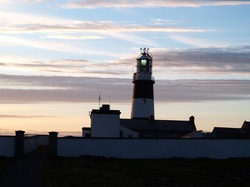 Tory Island lighthouse is situated on the west tip of the island.

Photographs and information about Tory Island.