DONEGAL TOWN ~ Population 2,400
Dun na nGall ~ Meaning 'Fort of the Foreigners' referring to the Vikings who landed there 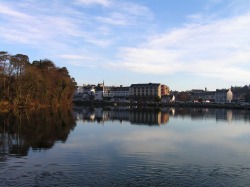 Donegal Town is a busy shopping and tourist town in south Donegal where the River Eske flows into Donegal Bay.  It was invaded by the Vikings in the 8th century and they used it as a port.  This invasion is where the town got its Gaelic name, Dun na nGall, which means ’Fort of the Foreigners’.  The Vikings built a garrison in the town, thought to have been in the grounds where O'Donnells Castle/Donegal Castle now stands.  In recent years human remains were found in the grounds of Castle these are thought to be Viking.  Donegal Town continued as a port until the 1960s when the last commercial boat left the harbour, sailing to Scotland with its load of electricity poles.

The centre of the town is called 'The Diamond' and markets were held here until 1967.  The markets were held on the second Friday of the month when the town would fill with farmers buying and selling cattle, together with various other traders selling their wares.  The market day would have been a great social occasion with locals being able to catch up on each others news.  In the Diamond stands an Obelisk in memory of 'The Four Masters' (see below).

O’DONNELLS CASTLE/DONEGAL CASTLE
The castle was built by Red Hugh O’Donnell in 1474 .  Red Hugh was  ”Principal of the great royal family, who ruled the Kingdom of Tir Conaill (Donegal) from 1200 until 1601.  It was built on a bend on the Eske for defensive reasons, the river protecting it on two sides.”   There is now a statue of Red Hugh by the artist Maurice Harron down on the pier.  On Lough Eske, just outside the town, there is a tiny island and on this island is the remains of O'Donnells Keep where the O'Donnell Clan held their prisoners.  All that is left of the Keep is one wall and that is now hidden behind trees and shrubs.  A picture of the little island can be seen in the photos below.

FAMINE GRAVEYARD
On the Ballybofey road out of Donegal Town, just near the edge of the town and down to the left there is a Famine Graveyard where vicitims of the last famine (1845-49) are buried.  There is a signpost on the road pointing to the graveyard.

THE DIAMOND AND OBELISK
The Diamond is the central pedestrianised plaza in the town.  It was designed by Captain Basil Brook who also built the Jacobean style extension at O’Donnells Castle (Donegal Castle) when he was given the Castle by the English Crown during the Plantation of Ulster and for his part in the Nine Years War.  He was also given Lough Eske Castle which is now an hotel, Solis Lough Eske The Obelisk which is to be found in The Diamond (central plaza in the town) commemorates four monks called the Four Masters who compiled and wrote the Annals of the Four Masters between 1632 and 1636.  The Annals of the Four Masters covers Irish history from 2242 BC to 1616 AD and remains one of the most important historical writings in Ireland.  The chief author was Micheal O’Cleirigh who was assisted by Peregrine O’Clery, Fergus O’Mulconry and Peregrine O’Duignan whose names are carved into the lower part of the Obelisk.  Micheal O’Cleirigh would travel around Ireland during the summer months gathering information both historical and mythological, and return to the Friary in Donegal Town at the end of summer where the winter months would be spent correlating and writing up the information gathered.  Manuscripts of the works can be seen in Trinity College, Dublin and Univeristy College Dublin as well as the Royal Irish Accademy.  A copy of part of the Annals can be viewed in the museum at the Franciscan Friary, Rossnowlagh.

DONEGAL FRANCISCAN FRIARY RUINS
These can be found at the end of the pier and it is here that the Annuls of the Four Masters was written.  “The Franciscan Friary of Donegal founded 1474 and richly endowed by the Lady Nuala O’Connor and the Lady Nuala O’Brien, wives of successive O’Donnell Chieftans.  The Friary followed the usual Franciscan layout of church on the south side, with it’s cloisters and conventual builds to the north.  It’s present ruinous state dates from 1601 when it was turned into a fortress by Niall Garbh O’Donnell when his English allies and besieged by Red Hugh (statue of Red Hugh on Pier).  Donegal Friary and it’s possession were confiscated in 1607 following the Flight of the Earls.”

THE ANCHOR
Down near the harbour there is a large anchor which is thought to date from the 18th century.  From the plaque at the anchor:
"This anchor probably belonged to the frigate Romaine, which was one of a French squadron out of Brest on the 16th September 1798, in support of General Humbert's army in Mayo.  Wolfe Tone sailed with the squadron.  Following engagements with English naval forces off the Donegal coast, the Romaine, with two sister ships, anchored in Donegal Bay on the 13th of October 1798.  Learning of Humbert's surrender and observing English militia on shore, the Romaine cut her cable, leaving her anchor and sailed back to France."

DONEGAL TOWN BANK WALK
Walk to Boyce’s Bridge (on the Killybegs road) just out of the centre (The Diamond) in Donegal Town and to your left you will find the Bank Walk.  It is a path of about 2.5 km along the west bank of the River Eske leading to Donegal Bay.  Take some bread to feed the ducks and swans!

DONEGAL RAILWAY HERITAGE CENTRE 074-97 22655 http://www.cdrrl.com/
From their site: “A developing museum and heritage centre concentrating on the CDR (County Donegal Restoration) and, as it grows, bringing in the Lough Swilly and GNR(I) lines in Donegal. The headquarters for the society’s project to restore a section of original CDR track and operate original vintage stock. Rolling stock on site undergoing restoration: Class 5 loco Drumboe; Brake/3rd no 28; Trailer no. 5. Not on site and unavailable for viewing: Railcar no. 15.”

DONEGAL BAY WATERBUS 074-9723666 http://www.donegalbaywaterbus.com/
From their site: “From the helm, Skipper Billy Bustard gives a lively commentary on the sights of special interest, freely illustrated with his own humorous asides and anecdotes. His witty observations bring to life events which shaped our country’s destiny. The waterbus passes the battle-scarred ruins of the Abbey – once the home of the legendary chieftain Red Hugh O’Donnell, and his saintly wife Nuala -  where the first history of Ireland was penned by the scholars called the Four Masters. St Ernan’s island is linked to the mainland by a causeway, built as a thank-you from his tenants to a benevolent landlord who saved many from starvation.”

DONEGAL GOLF CLUB ~ Murvagh 074-9734054 http://www.donegalgolfclub.ie/
The golf club is situated 7 miles/11 km outside Donegal Town off the main Donegal Town to Ballyshannon road (N15). “This outstanding links golf course offers a genuine challenge to the accomplished golfer and is an all round “true” test of golf. Being one of the longest golf courses in Ireland and Europe, it is ideally suited to big hitters of the ball. The reputation of Donegal Golf Club at Murvagh, designed by the legendary course architect Eddie Hackett, has been further enhanced by the new designs of Pat Ruddy.   Continually featured in Golf Worlds Top 100 Courses in Ireland & Great Britain, this is a real challenge not to be missed. Darren Clarke, one of the heroes of the resent Ryder Cup held at the K Club, has described Donegal Golf Club as “one of my favourite courses in the World”.”

DONEGAL CRAFT VILLAGE 074 9722225  http://www.donegalcraftvillage.com/
”Donegal Craft Village is a showcase for contemporary arts and crafts in Ireland. Stop off and indulge in the award winning restaurant renowned for its freshly ground coffee, delicious home made cakes and gourmet lunches. The beautifully landscaped grounds include a picnic area, a charming courtyard, and spacious, free, car & coach parking.”

DONEGAL ART GALLERY 074-9725887
“The Donegal Art Gallery is located on Upper Main Street, Donegal Town, and is open Monday to Saturday, from 9am to 6pm.  Exhibitions change each fortnight, commencing on Fridays from 7pm onwards from March to December displaying paintings, ceramics, bogwood sculptures, tapestry, sculptures, glassware, photography and wall hangings, as well as paintings.  The Gallery is opened all year. All exhibitions feature either local artists or local scenes of County Donegal.”


Click on any of the photos below to enlarge 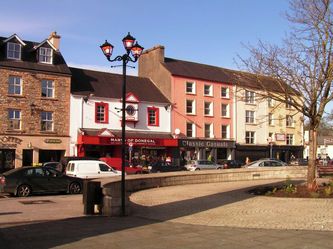 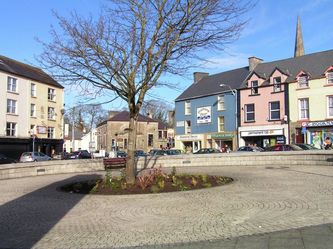 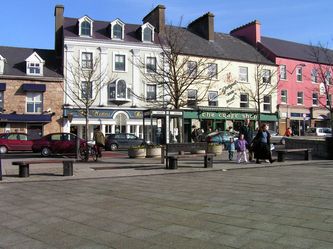 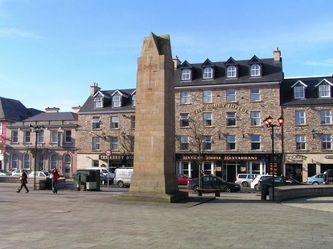 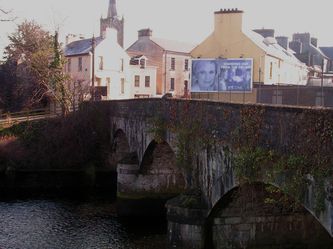 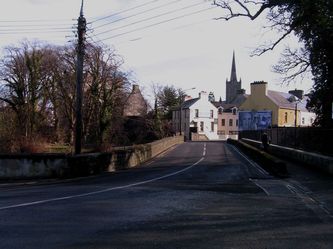 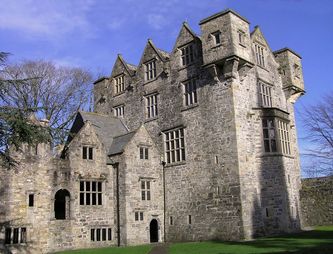 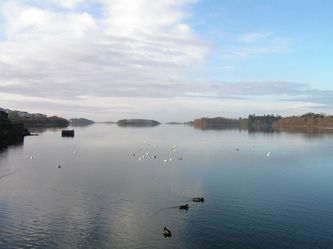 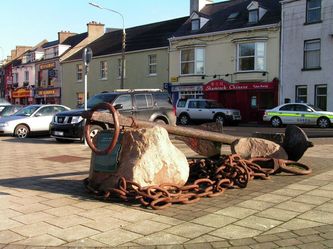