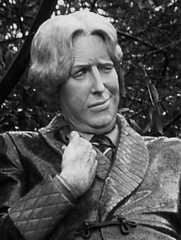 Oscar Wilde ~ not amused?
Dublin has many statues and monuments dotted around her streets and parks.  They commemorate a person from Irish history or an event in Irish history.  Dubliners, 'Dubs', can be very witty and many of these statues are now better known by the rhyming nicknames they have been given by these wits.

Most nicknames are amusing but some can be a little offensive but they are what they are and whether good or bad are now forever attached to the particular statue.

ANNA LIVIA ~ The Floozie in the Jacuzzi 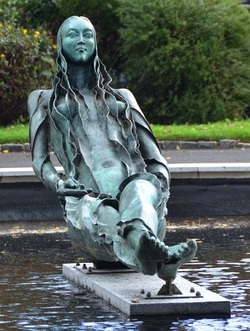 Anna Livia
The statue of Anna Livia is much better known as "The Floozie in the Jacuzzi".  She got this name when she was first placed in her initial home in Dublin, O'Connell Street.  She is a semi naked female (floozie) sitting in a large water feature with bubbles appearing from the little waterfall there (jacuzzi).

The water in the feature was to represent the nearby River Liffey.

Unfortunately she had to be moved from O'Connell Street eventually as the water in which she sat became a receptical for all manner of waste from nearby take-aways and worst of all, it became a thing to do on a weekend night to get some washing up liquid in causing a lot of bubbles for that "jacuzzi".

Other nicknames include 'The Hoore in the Sewer' (hoore being the pronunciation of some for whore).

To see the park where Anna Livia now lives and see more photographs, please go to our page on CROPPIES MEMORIAL PARK.

TWO WOMEN ~ "The Hags with the Bags" 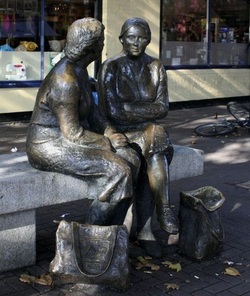 At one end of the Halfpenny Bridge, outside the Blarney Woolen Mills is a sculpture of two women resting on a stone bench chatting.  At their feet sits their shopping bags, one of which has the name of a nearby department store, Arnotts, on it.

This sculpture is famously known as 'The Hags with the Bags'.

JAMES JOYCE ~ "The Prick with the Stick"

James Joyce
This statue of James Joyce stands just off O'Connell Street and near the Spire.

The nicknames given to this famous Irish author include 'The Prick with the Stick'.

PATRICK KAVANAGH ~ "The Crank on the Bank" 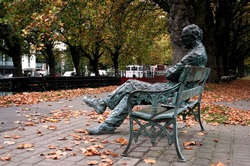 Patrick Kavanagh
There could scarcely have been a better place to site a statue of Patrick Kavanagh(1904-1967) in Dublin than on the banks of the Grand Canal.  On the plaque at the statue the words

"Leafy-with-love banks and the green waters of the canal pouring redemption for me." taken from his 'Canal Bank Walk':

"Leafy-with-love banks and the green waters of the canal
Pouring redemption for me, that I do
The will of God, wallow in the habitual, the banal,
Grow with nature again as before I grew.
The bright stick trapped, the breeze adding a third
Party to the couple killing on an old seat,
And a bird gathering materials for the nest for the Word
Eloquently new and abandoned to its delirious beat.
O unworn world enrapture me, encapture me in a web
Of fabulous grass and eternal voices by a beech,
Feed the gaping need of my senses, give me ad lib
To pray unselfconsciously with overflowing speech
For this soul needs to be honoured with a new dress woven
From green and blue things and arguments that cannot be proven."

And it is by the canal that he wished to be remembered as the words from "Lines written on a Seat on the Grand Canal, Dublin" show:

The nickname appointed to the statue of Patrick Kavanagh is 'The Crank on the Bank'.

MOLLY MALONE ~ "The Tart with the Cart" 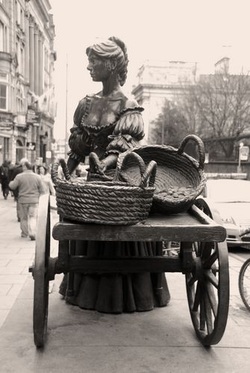 Molly Malone
Probably the most famous of Dublin's statues is the one of Molly Malone at the end of Grafton Street and opposite Trinity College.  It is rare to see this statue without lots of people standing around it taking photographs of their friends with Molly Malone.

Molly Malone has many nicknames, probably the most famous of which is 'The Tart with the Cart'.  She was given the name tart because of her partially exposed ample bosom.  Other nicknames include: 'The Dolly with the Trolly', 'The Dish with the Fish', 'The Flirt in the Skirt', and 'The Trollop with the Scallop'.

MONUMENT OF LIGHT ~ "The Stiletto in the Ghetto" 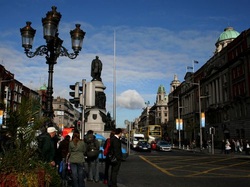 Monument of Light
The Monument of Light (Designed by Ian Ritchie Architects), or more commonly, The Spike was erected in O'Connell Street in ))))))) to welcome in the new millenium  It stands on the spot where until it was blown up in 19 ,,, Nelson's Column stood.

The Spike stands 121.2 meters/398' tall and has a girth at street level of oooooooooooo tapering to a point at the top.  It is made of stainless steel and reportedly self cleaning.

As we've said the most commonly used name for it is 'The Spike' but it has many other nicknames along with 'The Spike' and 'The Stiletto in the Ghetto' including: 'The Nail in the Pale' (the Pale refers to Dublin city), 'The Pin in the Bin' and rudely, 'The Stiffey at the Liffey'.

OSCAR WILDE ~ "The Quare on the Square" 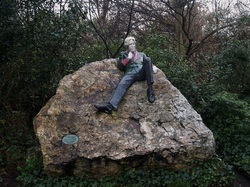 Oscar Wilde
Another of Ireland's great writers and poets, Oscar Wilde (1854-1900), has his likeness memorialised in the park at Merrion Square (Archbishop Ryan Park) near the home he once lived in at No.1 Merrion Square.

Oscar, although married at one time, he was famously homosexual and served time in English prisons (Pentonville, Wandsworth and Reading) for his homosexuality and penned one of his most famous poems 'The Ballad of Reading Gaol" after his release from that jail in May 1897.

So, his sexuality inevitably lead to the nicknames given his statue 'The Quare on the Square' (quare being a pronunciation of the word queer and square in reference to Merrion Square), 'The Fag on the Crag' and 'The Queer with the Leer'.  Not very nice given his great contribution to literature. 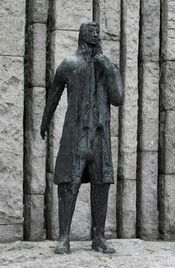 The statue of ThobAold Wolfe Tone can be found on the edge of St. Stephen's Green and we assume the nickname "Tone Henge" is a play on Stone Henge relating to the tall standing stones behind the statue of Wolfe Tone.