FACTS, INFORMATION AND TRIVIA ABOUT IRELAND AND THINGS IRISH Ireland is and island between the Atlantic Ocean and the Irish Sea and:

LARGEST
CHURCH BELLS
The largest Carillon of bells in Ireland (and also England, Scotland and Wales) is housed in the spire of St. Coleman's Cathderal in Cork
LARGEST CHURCH IN IRELAND
The largest church in Ireland is St. Patrick's Cathedral, Dublin which is 300' in length
LARGEST BLANKET BOG IN EUROPE
The largest blanket bog in Europe is The Bog of Allen in County Kildare
LARGEST CITY PARK IN EUROPE
Phoenix Park in Dublin with an area of some 1,752 acres is the largest city park in Europe
LARGEST TEDDY BEARS PICNIC
The largest teddy bears picnic was held in the Phoenix Park at Dublin zoo on the 24th of June 1995 with 33,573 teddy bears and their owners in attendance 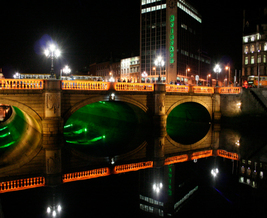 O'Connell Bridge, Dublin
O'CONNELL BRIDGE, DUBLIN
is the only traffic bridge in Europe that is wider than it is long.  The bridge was originally made of rope and was only able to take one person and a donkey at a time.  The rope bridge was replaced by a wooden bridge in 1801 and later replaced in 1863 by the current concrete bridge.  The original name of O'Connell Bridge was the Carlisle Bridge

ST. STEPHEN'S GREEN, DUBLIN
The design of Central Park, New York is based (on a much larger scale of course) on the design of St. Stephen's Green in Dublin city. 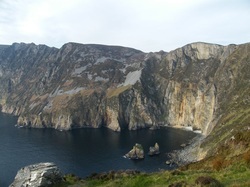 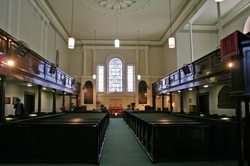 St. Michan's, Dublin
MATERNITY HOSPITAL
The world's oldest maternity hospital is The Rotunda, Dublin which was founded in 1745
NEWSPAPER
The oldest newspaper in the world is the Belfast News Letter which was founded in 1737
PUB
The oldest pub in Ireland is often said to be The Brazen Head, Dublin which dates from 1710 but it is in fact Ireland's third oldest pub, predated by:
~ Sean's Bar, Athlone, County Meath dates from 900AD
~ The Boot Inn, Cloughran, Dublin dates from 1593
CHURCH
St. Michan's, Dublin is probably the oldest church in Ireland and on the grounds where the church now stands there was previously an earlier 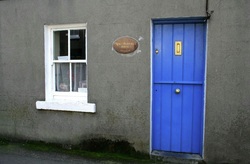 Nora Barnacle's Cottage, Galway
MUSEUM
The smallest museum in Ireland is the home of Nora Barnacle (wife of James Joyce) called 'The Nora Barnacle Museum' in Galway city.  The house contains letters, photographs and other memorabilia of their life together.
CHURCH
Measuring just 12 feet by 6 feet, St. Gohnan's in Portbradden, County Antrim is Ireland's smallest church.

BACK TO ALL THINGS IRISH
BACK TO HOME PAGE