Throughout the county of Donegal are there many places relating back to the 'Great Famine' (an gorta mór), be it famine graveyards, parting points for emigrants trying to escape the famine, to famine walls.

The Bridge of Tears, or Bridge of Sorrows, Falcarragh
Not far from the town of Falcarragh there is a tiny bridge called The Bridge of Tears (or Bridge of Sorrows).  This was where in the 19th and early 20th century local families would walk with their loved ones who were leaving home to escape famine and terrible poverty to seek a better in life in America or Canada.  There were no railways or indeed any other forms of public transport to speak of and so a very long walk awaited those departing emigrants.

In those days the chances of parents ever seeing their departing young again were almost non-existent as the journey was too long, arduous and expensive so this parting point really was for most, the last time they would be able to see their loved ones.

Added to that, there was the knowledge that many of those who took the journey would never made it, dying instead of sickness and disease on the ships transporting them in terrible conditions. Because so many died on their desperate journey to escape famine these ships were called 'coffin ships'.  Not because the bodies were put in coffins ~ just that the poor person had died.  They weren't put in coffins, they were thrown overboard.

So the parting here was final and there would have been many tears shed, hence the name 'The Bridge of Tears'.

The information stone at the bridge reads:

The roughly translates to
"Family and friends of the person leaving for foreigh lands would come this far.  Here was the separation.  This is the Bridge of Tears."

CLANNAD 'The Bridge of Tears'

The Donegal musicians, Clannad, sing movingly and beautifully about The Bridge of Tears:

'WAYFARING STRANGERS: The Musical Voyage From Scotland and Ulster to Appalachia'

Three of our photographs of the Bridge of Tears here have been used in a magnificent publication 'Wayfaring Strangers' by Fiona Ritchie and Doug Orr (the University Of North Carolina Press).

The Foreword is written by Dolly Parton and reads:
​"Fiona Ritchie has spent over thirty years telling the stories of Celtic music on her show broadcast over National Public Radio, 'The Thistle and the Shamrock'.

The book is now available in paperback too and you can purchase the hardback or paperback HERE. 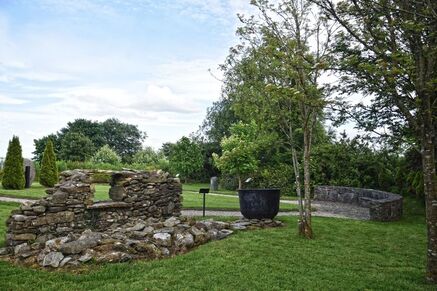 The Famine Garden, Drumkeen
In the village of Drumkeen, between Letterkenny and Stranolar you will find a beautiful little garden dedicated to the souls lost in the famine.  It sits across the road from St. Patrick's Church and next to the graveyard.  It is beautifully laid out with touching memories of the famine and silent and peaceful for thoughts of those souls.

The Garden was officially opened on the 23rd of June, 1997 by the then American Ambassador to Ireland, Jean Kennedy-Smith.

It was officially blessed by the then Bishop of Raphoe, Dr. Phillip Boyce on the 7th of July 1997. ​

The Garden, according to one of the plaques, was "the brainchild of Fr. Tom who worked to bring it to completion."   The plaque sits beside one of the three commemorative trees planted there, this one by the said Fr. Tom, Reverend F. Tom Curran, C.C., Dumkeen on the 15th of June, 2010.  The plaque beside the Famine Pot further reads: "The Famine Garden in Drumkeen was the brainchild of Father Tom Curran.  Work began on the garden in 1996.  It was blessed and dedicated in the Summer of 1997 to the memory of all those who died or emigrated as a result of the Great Famine 1845 - 1847."

There is another commemorative tree planted by Declan McIntyre and his wife Cathy on the 4th of July, 1998.  Declan McIntyre was then the Deputy Prime Minister of New Zealand. 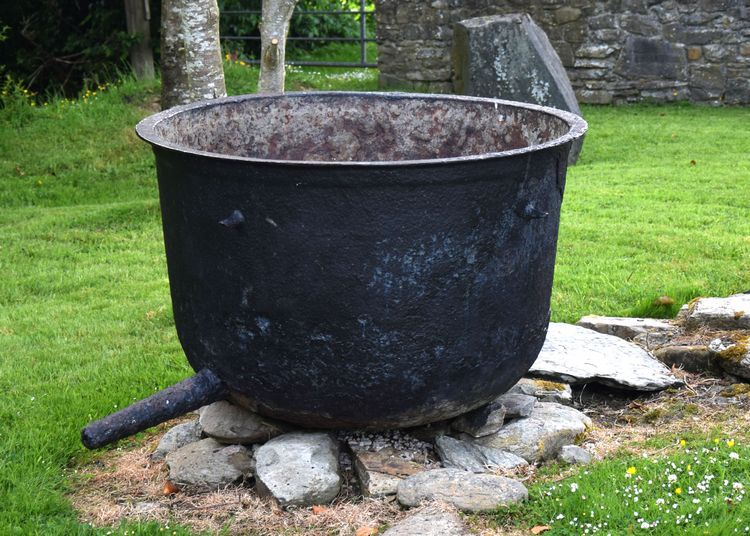 THE FAMINE POT
The plaque beside the famine pot in the Famine Garden reads:

"FAMINE POTS IN CASTLEWRAY.
William Wray was the landlord in Castlewray at the time of the Famine.  The Wrays had no money when William took over the Estate in 1843.

In December 1846 an investigator arrived in Donegal from The Society of Friends headquarters in Dublin.  His name was James H. Turke.  His report and the reports of other Quaker investigators led to the setting up of the Soup Kitchens.  The Famine Pots arrived in Donegal in January 1847 from Liverpool to ports around the County.  The pots that came to Castlewray are thought to have come up the Swilly.

William Wray died on the 24th of June 1884.  His wife and family went to California two or three years later.  Their departure marked the end of the Wrays and the end of landlords in Castlewray.

Harry Russell worked for Mrs. Wray after William's death.  He sold two of the pots to Charlie Crerand for 8 shillings in 1936. He used this pot to water his cattle on land at the edge of the River Swilly.  Eamonn Sweeney took over the Crerand property in 1970, his cattle continued to drink from the pot until the mains water was connected in 1997." 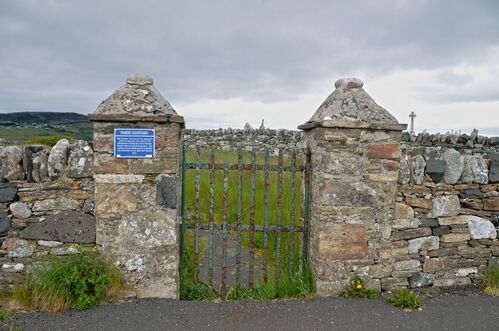 The plaque outside the graveyard reads:
"FAMINE GRAVEYARD
This Famine Graveyard was opened in 1846 for paupers who died in The Workhouse during the Great Famine.  Small stones marked the graves.  The metal stone crosses mark graves of people who drowned at sea and were buried here."

From Buildings of Ireland.ie:
"It largely contains the unmarked graves of victims of the Great Famine (1845-51) who died at Dunfanaghy Union Workhouse (see 40807008), which is located a short distance to the north-west. It is marked by a simple modern timber cross and a modern memorial stone, and now acts as a moving reminder of this traumatic event in Irish history. Its preservation and maintenance demonstrates the local significance placed on the site, not least in providing a poignant area of reflection. Dunfanaghy Union Workhouse was originally built to standard designs by George Wilkinson at a cost of £4,350 for the buildings and £855 for the fittings. It was designed to accommodate 300 inmates and first admissions took place on the 24th of June 1845. Although designed to accommodate 300, the workhouse was grossly overcrowded during the Famine with outbreaks of dysentery and other fevers common; it is likely that there are hundreds, if not thousands, of individuals interred here. This ‘paupers’ graveyard’ also contains a number of simple iron crosses that mark the graves of ‘strangers drowned at sea." 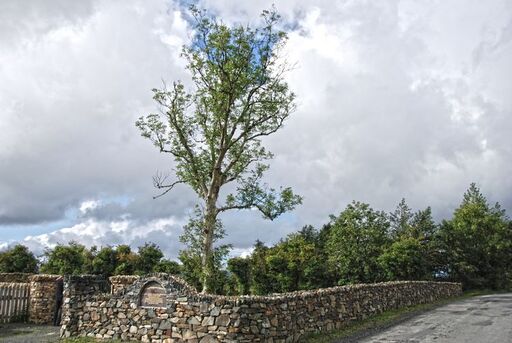 There are no marked graves as poverty ensured that any family left would never have been able to afford any kind of gravestone, however the burial ground is now enclosed by an attractive stone wall and the land is kept neat and tidy to respect those buried there.

Famine Graveyard Stranorlar
This famine graveyard is quite large and enclosed by an old stone wall with iron gates and an opening where once there was perhaps a large door.   The graveyard is on private land so you must ask locally where it is and then ask for access.