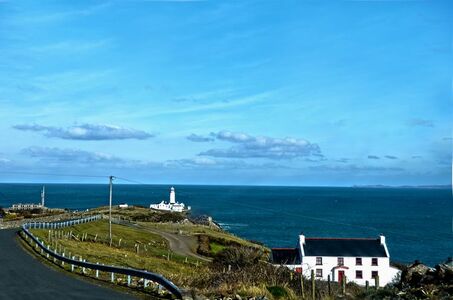 Fanad is made up of tiny villages and townlands but no larger towns.  Since the building of the Mulroy/Harry Blaney Bridge, it is connected to the Rosguill peninsula by road with a much shorter drive than it was before the bridge.

At the tip of the peninsula is Fanad Lighthouse, one of the three Wild Atlantic Ways spots of County Donegal.  The lighthouse is much photographed give it's stunning location, so much so that there is now a small cafe/gift shop and car park beside it. 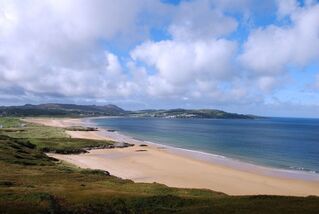 Ballymastocker Bay, Fanad
There are a number of magnificent sandy beaches on the Fanad peninsula with the most famous being Ballymastocker Bay which was once named the second most beautiful beach in the world.

And standing at the top of Knockfalla mountain at the roadside view point, a dizzying 363m/1,191 feet above the beach, it's not hard to imagine why.

The beach skirts Ballymastocker Bay in three segments, all sandy and beautiful and then on to Portsalon in the distance. 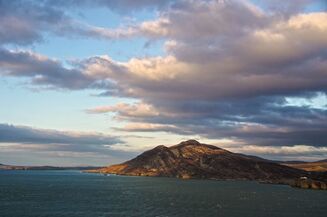 The view to the Inishowen peninsula
From this viewpoint you can also look over large tracts of beautiful green land and then to the east the peninsula of Inishowen.

To get on to Ballymastocker Beach just drive on down the winding road and you will come to a car park on your right where you can leave your car and walk on to the beach.

But remember, there are many more beautifully sandy beaches in Fanad too so keep exploring this magnificent peninsula. ​

THE VILLAGES & TOWNLANDS OF FANAD

Fanad is very sparsely populated, and with a population of approximately  making it a beautiful place to visit and see beautiful vibrant green countryside scenes.  There are a number of small villages, the largest of which is the one you enter when beginning your visit to Fanad.