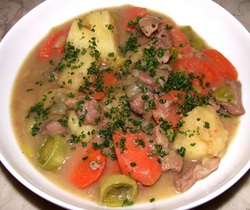 Traditional Irish Stew
There are a number of recipes for Irish Stew available but what we have tried to do here is make it as true to the original as possible.

Obviously things have changed over the years and our ancestors almost certainly would not have made a stock (see below), but then they didn't have to ~ they might not have had much but they did have something many of us can't have today and that is the freshest, totally organic ingredients right beside them.

We would imagine that the truest recipe would have included just mutton, barley and potatoes.  And it would only have been mutton, not lamb.  There are a couple of reasons for this; one, if someone was lucky enough to have a lamb they would not have killed it but allowed it to mature to produce more lambs, wool and even milk.  Mutton on the other hand, is from an older sheep and probably past her productive age and not of any use other than food and her coat; secondly the cuts of meat used for Irish Stew would have been meat that wasn't wanted by the more wealthy, typical of any peasant food worldwide, and so it would only have been mutton in Irish Stew.

All that said, the practicalities of today means that mutton is incredibly hard to find.  One place that you can sometimes find it is in Asian ethnic shops.  Other than that you might actually have to resort to using lamb.  If this is the case, use shoulder of lamb chops.  Ask your butcher to give you them trimmed but not cut into actual chops, ie in one piece of meat.  If they are already cut into chops, cut each chop into about 3 chunks of meat per chop.

Alcohol of any kind would never have been added to Irish Stew and should never be added to Irish Stew.  Recipes you see nowadays often include, for instance, Guinness.  Does anyone really think early Irish people had access to Guinness?  And even if they were lucky enough to have access to it, does anyone honestly think it would have been 'wasted' in food or to waste food?  No.  Certainly not.  In actual fact probably the only alcohol poor people in Ireland would have had any access to would have been potin and no Irish mother would have added such a thing to a stew intended for her children as well has the adults.  So no alcohol in Irish Stew.

TRADITIONAL IRISH STEW
As we said above, our recipe is as near as possible to what the original Irish Stew would have been.  If you follow this recipe you will have a hearty, unctuous stew.  Don't fret about which vegetables to add ~ if you don't have leeks use onions, if you don't have carrots leave them out altogether.  If you have some turnip cut it into cubes and add it before the potatoes.  Remember, Irish Stew was a peasant dish and those people didn't have the luxury of being culinary purists or food snobs ~ they were simply making the most of what was available to survive.

INGREDIENTS (Makes enough for approximately 6 to 8 people)
1kg/2 lbs mutton (neck) fat removed and cut into 1" cubes
(Alternatively 6 to 8 shoulder of lamb chops)
8 medium sized potatoes, peeled and cut into quarters and set aside in bowl of water
2 handfulls of barley, rinsed under cold water
6 carrots, peeled and cut into thick slices
3 leeks, cut into medium slices and rinsed to remove any dirt
1 large onion, peeled and cut into small cubes (if not using leeks, use 3 large onions instead of 1)
Salt (add to your taste at the end of cooking) and pepper if desired
A little oil for frying off the meat
4 potatoes for thickening (peel, boil and mash)
A large handfull of parsley, washed, dried and finely chopped

SECRET TO THICKEN THE STEW
The chunks of potatoes and the barley will thicken the stew somewhat and to thicken it further towards the end of cooking you could use a teaspoon of cornflour (mixed in a cup with a tablespoon of cold water) but a much better way is separately boil 4 potatoes.  Once cooked, mash thoroughly and add to the stew about 20 minutes before it is ready.  This will thicken it up naturally and very well.

METHOD
1.  Heat the stock in the large saucepan and keep simmering gently once heated and add the barley

2.  If not already in cubes, cut the meat into one inch cubes

3.  Rinse the meat under a cold running tap to remove any blood (and cut down on scum gathering on the top of the stew) and dry using kitchen paper

3.  Heat the frying pan and once hot, add the oil

4.  Add one third of the cubed mutton/lamb to the pan and brown.  Only add this amount at a time or the meat will not brown to seal and preserve the flavour of the meat

5.  Add the first browned meat cubes to the hot stock and repeat until all the meat is browned

6.  Re-heat the frying pan and add a little more oil and add the chopped onion and fry for a few minutes without browning and add to the saucepan

7.  Ladle a few scoops of stock onto the frying pan and move around with your wooden spoon to make sure you get all the tasty bits left behind after the frying.  Add back to the stew

8.  Place the lid on the saucepan and simmer the meat and the chopped onion very gently for 2 and a half hours.  Stir every half hour or so to make sure nothing is sticking to the bottom of the pan.  If it is starting to stick, turn the heat down lower again.  During the course of cooking if any scum appears on the top of the stew simply skim off using the ladle and discard

9.  After 2 and a half hours add in the chopped carrots, turn up the heat and cook for a further 15 minutes.  Stir occasionally to make sure it is not sticking

10. Add the mashed potato (to thicken the stew)

11.  Add the cut leeks and quartered potato chunks.  Cook for 15 minutes, stir occasionally to make sure it is not sticking

12.  Take out a bit of the meat ~ it should be almost meltingly tender at this stage which means it is ready

13.  Finally add salt and pepper to taste and serve in big bowls, sprinkling first with some finely chopped parsley.  You will need a fork and a spoon to eat your Irish Stew 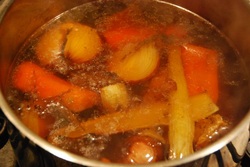 Lamb stock simmering on the stove
While it is not strictly necessary to make your own stock, if you do have the time it is certainly worth the extra effort.  Yes, it is time consuming and a lengthy process but it can be frozen and therefore made in advance of the time you will be making the Irish Stew.  Added to that, your kitchen will be filled with the most fabulous aromas during cooking!

The recipe below ultimately yeilds approximately two and a half pints of stock.

2.  Once hot, place lamb bones on a baking/roasting tray and put in oven

3.  Once bones start to brown place vegetables onto tray with the bones

4.  When bones and vegetables are browned remove from the oven

5.  With tongs lift bones and vegetables off the tray and place in the saucepan.  Do not add the fat from the
baking/roasting tray, simply discard it

6.  Put the 3 litres/5 pints of boiling water into the pan and add the peppercorns and bay leaves

7.  Simmer gently, on the lowest heat possible, with the lid for an hour, then remove the lid and simmer for a further 2 hours.  Throughout this simmering period, ladle off any scum that gathers on the top of the liquid and discard

8.  Leave to cool and put in the fridge overnight

9.  In the morning lift off the hard fat that will have formed on the top of the stock and discard

10.  Place the sieve or collander over the bowl and move the stock from the pot with a ladel and then finally tip the remainder into the sieve/collander.  Discard all the used vegetables, peppercorns and bay leaves

11.  Wash the saucepan to remove any remainder of fat and wash the sieve.  Place the sieve over the clean saucepan, line with two sheets of kitchen paper laid across the sieve and ladle the strained stock back through this.  This will remove more fat.  You stock is now ready for cooking or freezing

12.  To freeze, line a large plastic box or bowl with some cling film and pour the coolliquid into it.  Place box/bowl in freezer and allow to set.  Once set remove from freezer and lift cling filmed stock out and wrap in a further stretch of cling film and place back in the freezer.