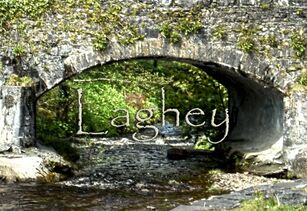 Laghey, County Donegal
Laghey is a small village in south Donegal approximately 7km/4 miles from Donegal Town and about the same from the beautiful Blue Flag beach at Murvagh and Donegal Golf Course at Murvagh.

​The village boasts a beautiful old bridge called ‘The Seven Arches Bridge’ which runs over the river Laghey and is considered one of the more important bridges in south Donegal.  It was built in around 1768 to carry the former Dublin/Sligo to Derry mail coach and appears on the Taylor and Skinner ‘Maps of the Roads of Ireland (177-1783’.  It was extended in 1775 some seven years after it was first built.  Note: it is now actually 6 arches as the one on the Laghey village side of the bridge is now bricked up.

It is home to the ‘Laghey Blast Festival’, a music festival that is held each May Bank Holiday in the village since 2010.

LAGHEY ~ Further information kindly supplied from the archives of Trevor Johnston of The Bay Bush and Beyond on facebook.

"Laghey Village (Lathach) is a small village on the south side of the Laghey River four miles south of Donegal Town.  It began in the 17th Century with a few homesteads, grew during the 18th Century and by the end of the 19th Century was a village of a single street of two-storied slated houses.  The village was built by the McClay and McMurray families.

The name Lachach means "the muddy place".  The village is situated with its back to Laghey Hill and facing Laghey Holm.  The Holm was the catch pit for the mud that gushed down the hill in wet weather and formed a small lake which came to be filled with sand, gravel, earth and turf.  The Laghey River once flowed to Carrick Alt and into the sea at Oughtnadrim.  When the road from Donegal (Donegal Town) to Laghey was being constructed in the 17th Century, a channel was cut through the rock from the Holm to Ballykillone River, a distance of a few hundred yards, and the Laghey River was diverted into Ballykillone River.  The Holm then dried up.  In 1959, Laghey Holm was selected as the site for St. Eunan's School and the formation of the Holm came to light.

Prior to 1954, Laghey was a Straibaile, i.e., a one street village with a score of dwelling houses.  The principal buildings were Church of Ireland (1837), the Orange Hall (1906), Laghey National School (1893), but actually in Trummon), a Post Office, two public houses, two grocery shops, the railway station, a dispensary, a doctor's residence, and a forge at Lawn's house.  In 1954 the Donegal County Council built twelve cottages in a field on Laghey Holm, and in 1960 St. Eunan's School was opened.  When the water system was installed for the school's use, the Council took over the operation of the well in Laghey Holm.  The well now supplies water to Mullinasole, Bridgetown, Tullyearl and St. Ernan's.  Prior to this the people of the village relied on a pump erected on a footpath outside Lawn's house, which got its water from the railway well.  The best known wells in the village were Dr. Moran's and Gorman's.

The Seven Arches Bar owned by Tom Gorman once belonged to his uncle Jacob.  Jacob bought the public house from a Molloy in the 18th Century.  It served as the Coach House Inn, where horses were changed and stabled.  The stables were across the road in what is now the Church of Ireland churchyard beside the river.  Rings were inserted in the walls of the inn for tying the horses.  In the side wall next the street an iron bar is secured in the walls six feet up, which was once used for weighing pigs."
OLD WRITING FROM Duchas.ie
"I have an aunt living in that part of the village of Laghey that is called Rathneeny. Her name is Kathleen Connolly. She says that when she was a child away back between the years 1860 and 1870 she attended an old thatched roofed school. The ruins of that old building are still to be seen lying along the left hand side of the street close to the railway gates and between the house occupied Mr Johnny McMurray and that occupied Charles Kirkpatrick.

She tells me that the school was attended by both Catholics and Protestants. The average was about sixty and owing the smallness of the building, it was about the size of the kitchen in a country house, very often many of the children had to remain outside. There was a boarded floor and long desks like those in this school now. The fire was in a grate. The children wrote compositions and did questions in arthmetic [sic] on slates. The same books were used from year to year." 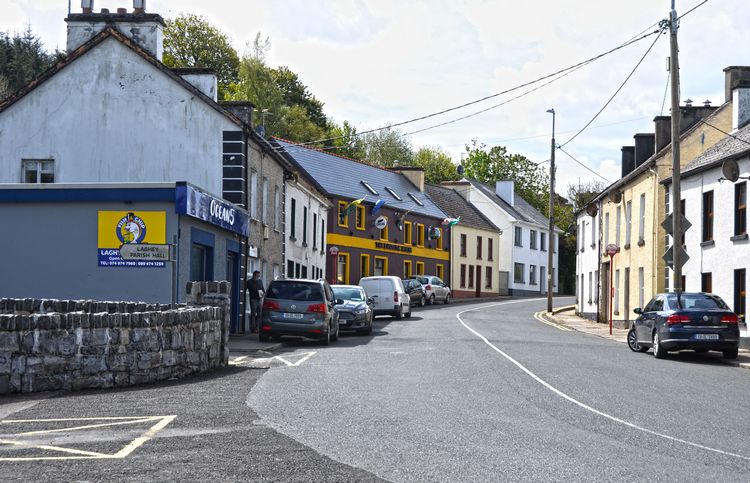 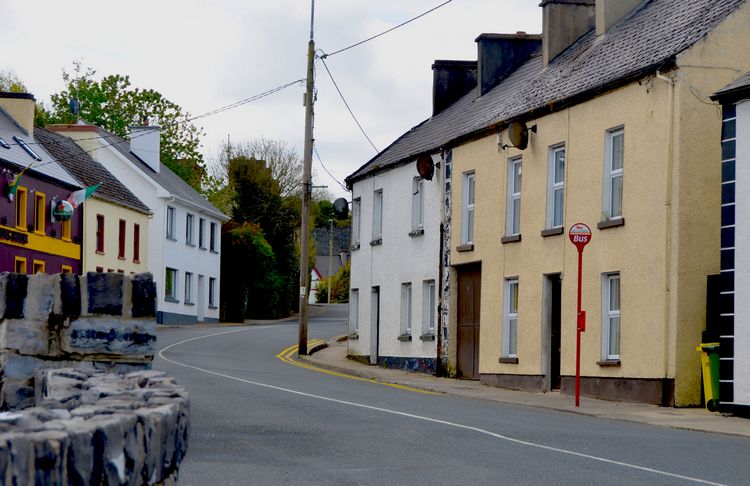 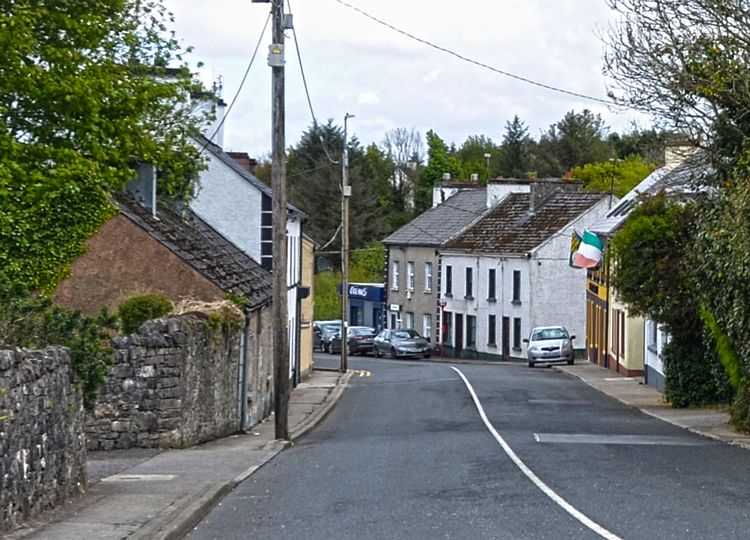 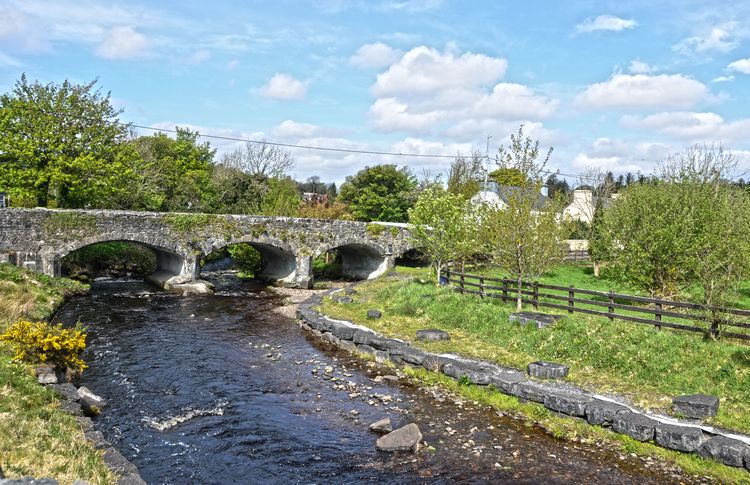 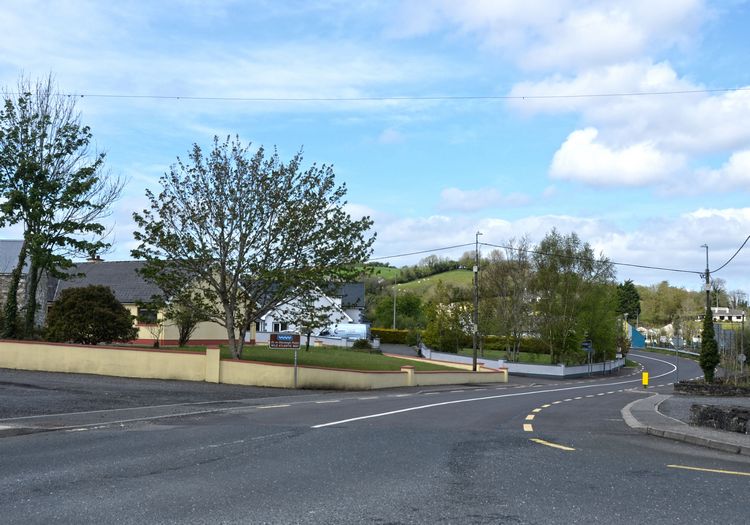 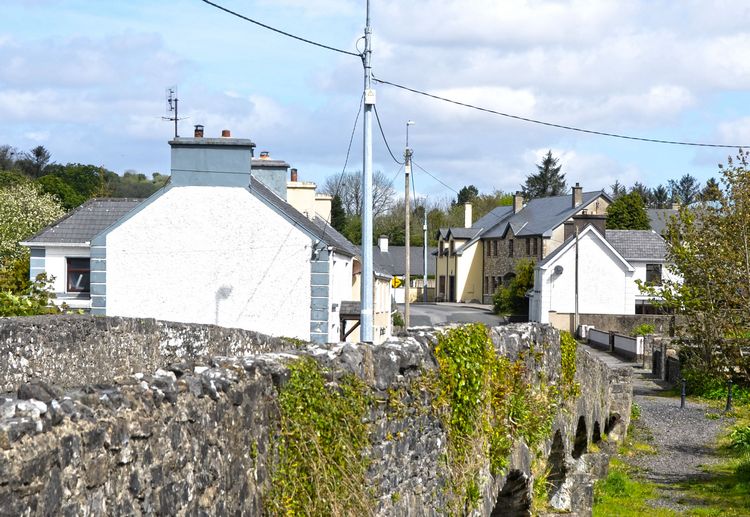 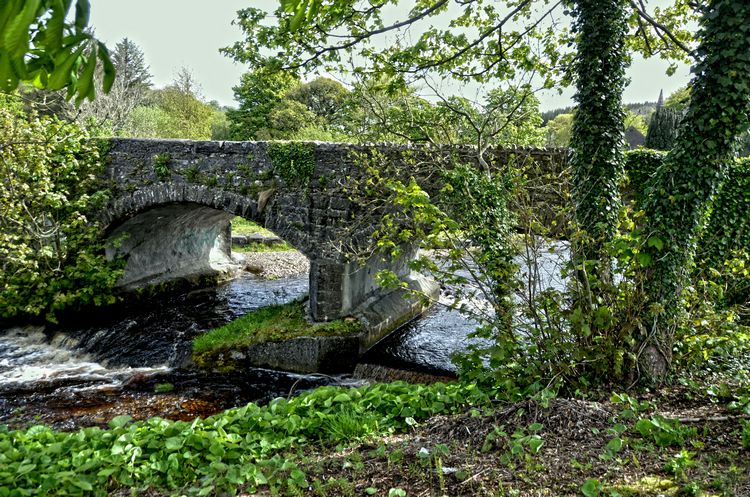 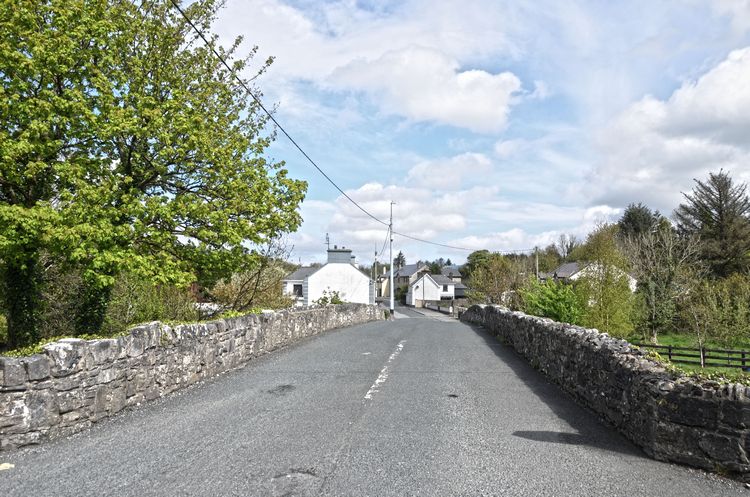 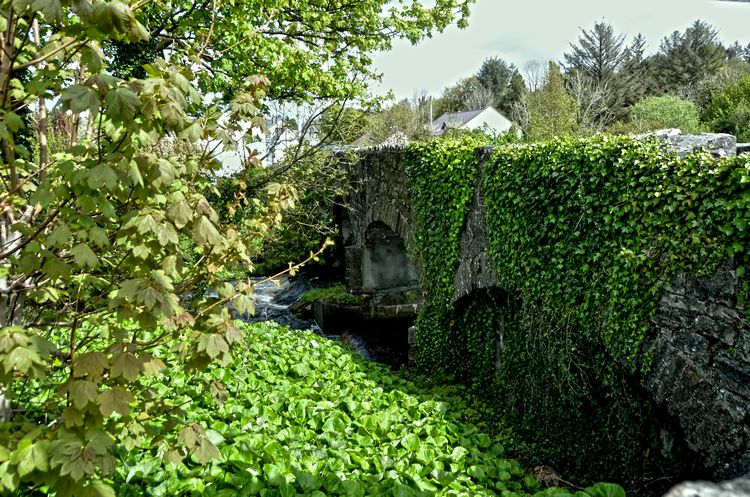 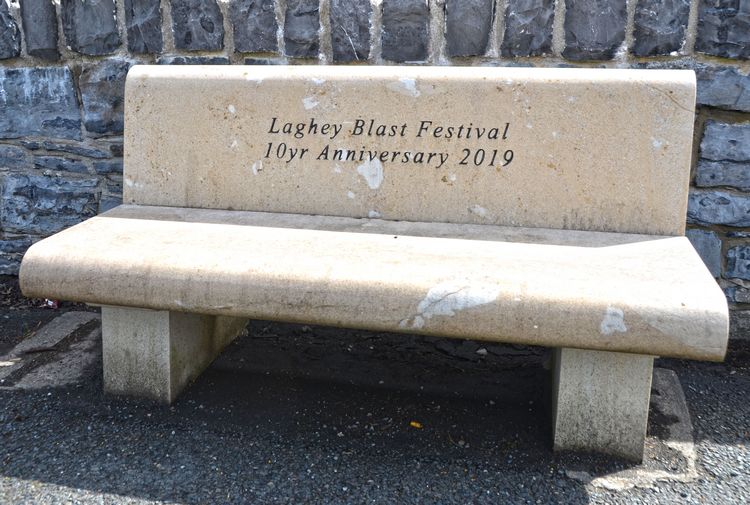 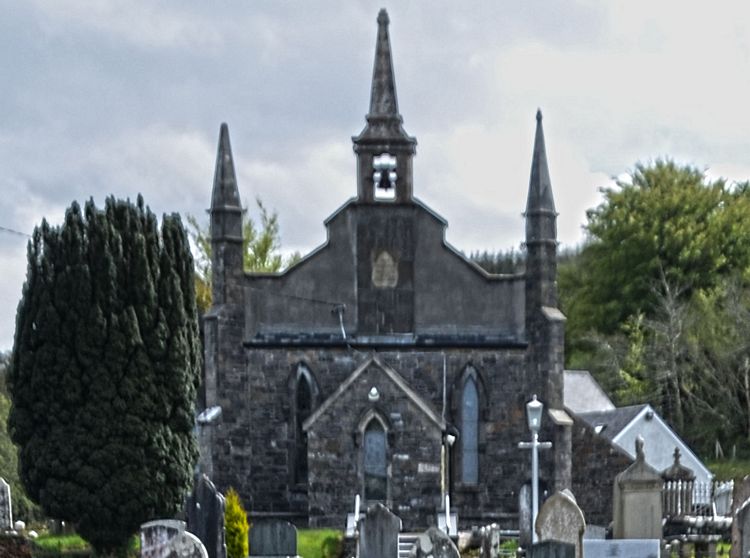 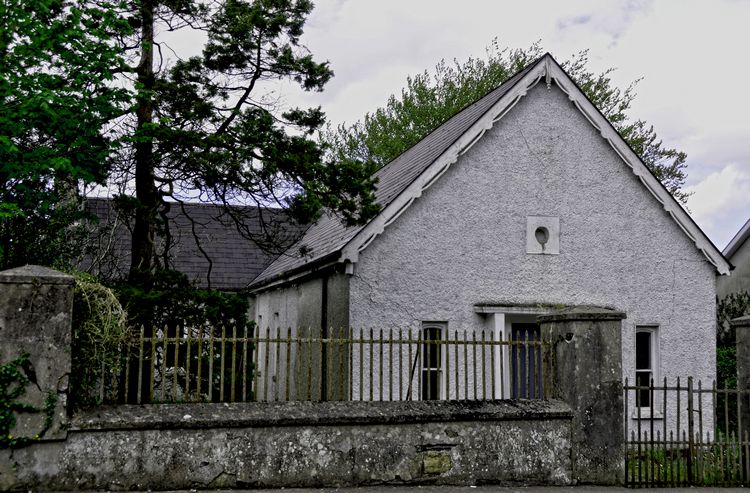 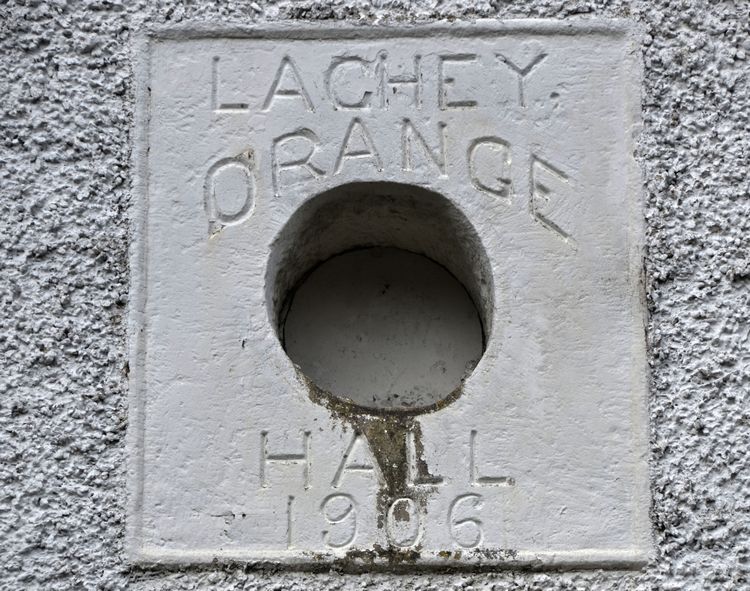 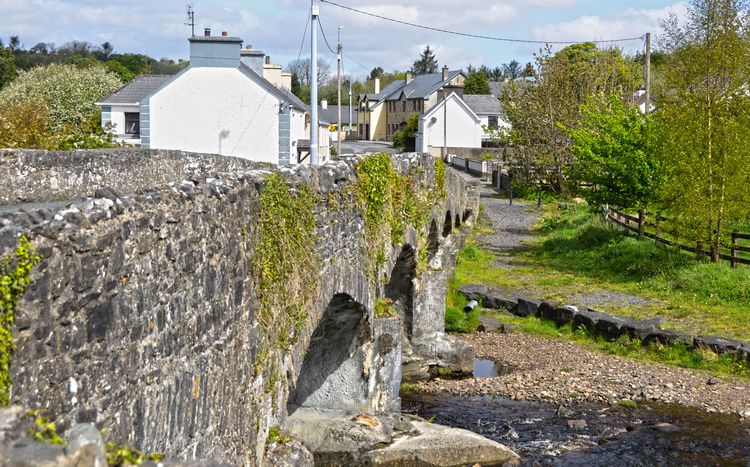 back to towns and villages of donegal