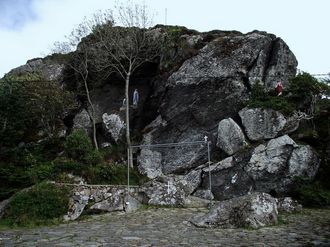 Mass Rock at Croaghlin, Killybegs
Dotted around the county, in places hidden from general view, there are old Mass Rocks.  Mass Rocks are around 400 years old and are places where Catholics gathered to practice their faith during Penal Times (under Penal Laws brought in and enforced in Ireland from 1695 by the British) when such activity was banned in Ireland.  Indeed, if they were caught celebrating Mass, the priest there would more than likely have been killed.

As they were illegal and because of the danger, they had to be hidden and so you will find them in out of the way places which have some high ground from which some of the congretation could keep a look-out in case of danger approaching.  To further guarantee secrecy, the masses would not have taken place at set times but rather a time decided and the information passed amongst the people of the area.

The last Mass Rock in Ireland was in Donegal, the Ardaghey Mass Rock which was used right up until 1895.  (See below).

Some of the Mass Rocks are still in use today.  Not of course for regular masses but for special occasion or commemorative masses or maybe just an annual mass.

If you wish to visit any of these places listed below, ask directions in the town or village indicated below and you will get directions ~ it is a lot easier than us trying to describe here how to find them as some are in out of the way places.

Here we have gathered photographs of some of those we have come across on our travels around Donegal.  More will be added as they become available.

THE LAST MASS ROCK IN IRELAND ~ THE ARDAGHEY MASS ROCK

Near the villages of Inver, Frosses and Mountcharles and on the site where now sits St. Naul's Church was the Ardaghey Mass Rock, the last Mass Rock in Ireland.  It was used to say Mass right up until 1895 when the church was built there.

We will be adding an old photograph of the Ardaghey Mass Rock when it comes to hand.
MASS ROCK, BARKILLEW, ARDARA
(Click on any of the photos to enlarge)

MASS ROCK (CAVE), CATSBY CAVE, BALLYSHANNON
(Click on any of the photos to enlarge)

MASS ROCK, CROAGHLIN, KILLYBEGS
(Click on any photo to enlarge) 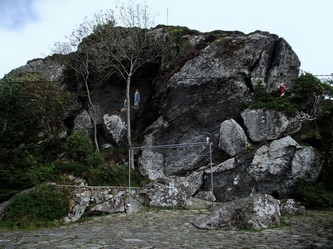 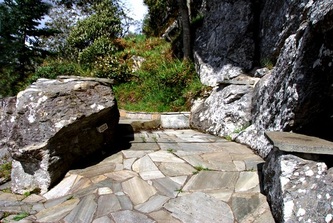 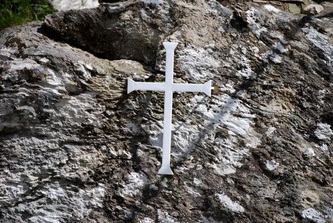 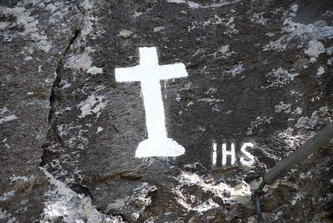 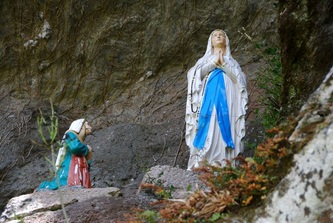 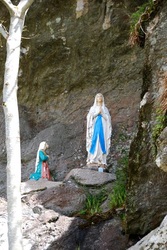 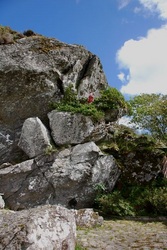 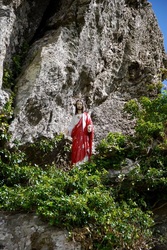 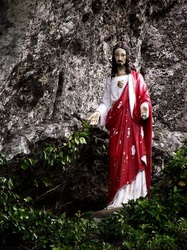 MASS ROCK, KINCASSLAGH
(Click on any photo to enlarge) 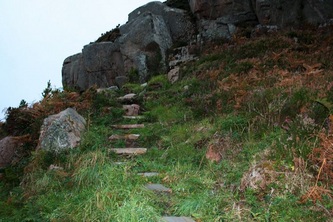 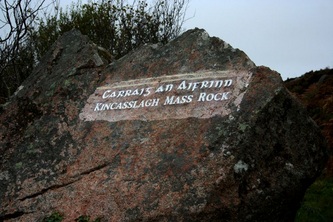 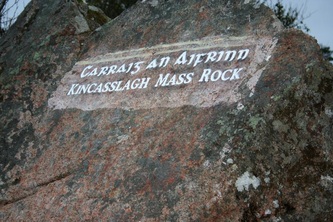 The Mass Rock in Letterkenny is situated in the Glencar area of the town.  The last Mass in recent times held there was in June 2000 (see photo below).  There is a big clean up of the area going on at the moment getting ready for a Mass to be held there for the year of the Gathering.  The Mass will take place in August (2013).  The information and photographs of Letterkenny Mass Rock were very kindly supplied to We Love Donegal by Brian Drein. 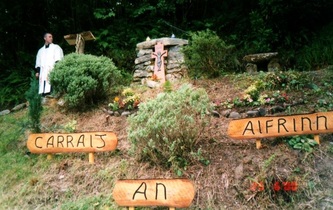 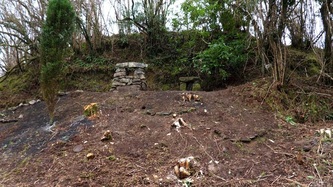 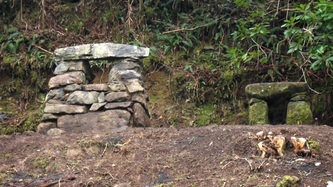 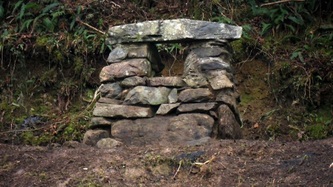