DUNLEWEY CHURCH OF IRELAND or THE OLD CHURCH, DUNLEWEY 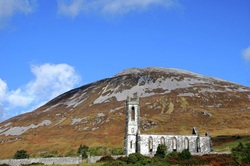 Dunlewey Church of Ireland and Errigal
Nestled at the foot of Errigal (the hightest mountain in County Donegal) and overlooking the beautiful Poisoned Glen sits the beautiful 'Old Church of Dunlewey'.

"Jane Smith Russell had the church built as a memorial to her husband, James Russell, landlord of the Dunlewey Estate, who died on 2nd September 1848.  James Russell was laid to rest in a vault under the church floor.  The church was consecrated on 1st September 1853 as a Chapel of Ease to Tullaghabegley.  Tullaghabegley was the parish consisting of the present day Gweedore and Cloughaneely parishes.

The church is built of white marble and blue quartzite which was quarried locally.  The supply of marble in the nearby quarry has now been depleted.  The red brick in the arches of the windows was produced locally.  Remenants of the brickfield are still visible near Oilean Ghrainne when the level of the lake is lowered.

A two storey rectory was built in the nearby Glebe.  This field, part of the Dunlewey Estate, is now forested.  James Henry Bor was the only full time rector to reside in the rectory.  He was nominated by Jane Russell on the 6th of September 1856 and later was installed as rector of Raymunterdoney in 1872.  The church is at present under the curacy of the combined parish of Gweedore, Templecrone and Carrickfinn.

Also interred in the surrounding graveyard is Richard Lewis Crankshaw, owner of Dunlewey Estate, who died 29th November 1929.  His wife Nellie who died in 1946 is buried in the graveyard of the local R.C. chapel.  Her grave faces this church and her husbands grave.

With the decline of the Dunlewey Estate the potential congregation diminished and the church was not in regular use.  The expense of the upkeep and the passage of time added to the deterioration of the church.  In 1955 the roof was removed as a safety measure.  It's furniture and fittings were distributed to other churches within the diocese of Derry and Raphoe.  The bell is now installed in Cashel Church of Ireland near Doe Castle.

In 1987 the local community restored the floor.  In 2005, half a century after the unroofing, with grant aid for the Programme for Peace and Reconciliation work was undertaken to ensure that this beautiful and historic landmark was preserved for future generations.  In co-operation with Udaras na Gaeltachta and Fas the surrounding wall was subject to repair and conservation work.  Considerable funds were raised through the generosity of the local community in the form of sponsored walks."

In the graveyard there there lies the body of a man who was in a mixed marriage (ie he was Church of Ireland, she was Catholic).  He died first and is buried in the grounds of this church but she, being a Catholic, did not want to be buried there.  She is buried in the Catholic church across the valley, Church of the Sacred Heart.  However, even in death she wanted to remember her husband and her grave in the Catholic graveyard faces across the valley to her husband's resting place.  (The other gravestones in the Catholic church point another way to hers).