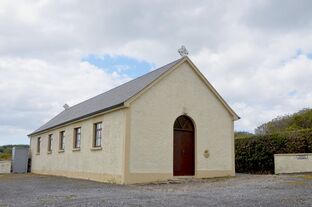 St. Colmcille's Church
This little Catholic church is situated about 8km/5 miles east of the village of Laghey.

The building started life as a school but in 1941 after the closure of the school it became a chapel.  It is no longer used for regular Masses with the last mass having been held there on the 8th of June 2003.  The then Parish Priest, Fr. Daniel McBrearty, enraged local residents by ending Masses there. Apparently the Rosary is still said there on a Sunday.

It was quite hard to find any further information about this church but Trevor Johnston of The Bay Bush and Beyond told us that it had previously been a school, St. Colmcille's School.  In 1944 the Parish Priest in Ballintra had a new school built at Lagheybar and St. Colmcille's old school was converted to a 'chapel-at-ease' to serve the people of Lagheybar and Trowerstown.

CONTROVERSY
Controversy seems to have attached itself to the old church.

A HOLY row has erupted between parishioners fighting to keep a small church open and the priest who wants to sell it.

Father Seamus Dagens gave parishioners at Drumholm, Ballintra, Co Donegal, a chance to oppose the sale of the disused church by writing 'No' on their collection envelopes at Mass yesterday. But most refrained from writing anything, thus apparently, giving the go-ahead for the building to be sold.

The priest angered some of his flock a week ago when he removed the tabernacle from the tiny St Colmcille's chapel, where there has been no Sunday Mass celebrated for five years.

He then asked parishioners who disagreed with his proposal to sell the church to write 'No' on their envelopes during the weekend collection from Mass goers at the much larger St Bridget's church near Ballintra village.

He revealed afterwards that only 50 households in a poll of 417 indicated that they did not wish the building to be sold.

But campaigners trying to retain St Colmcille's, which served a small community in the Laghey Barr area of the parish, claimed the poll did not reflect local opinion.

Members of the Laghey Barr Association claimed the poll was undemocratic and deprived many of a vote, since they had been withholding contributions in protest at the down-scaling of St Colmcille's five years ago.

Members of the association complained that the removal of the tabernacle from the chapel was against Canon Law.

Yesterday, Fr Dagens said he would reflect on the findings before making a final decision.

He reckoned that the St Colmcille's site -- large enough to accommodate "a four-bedroom cottage at most" -- would fetch about €100,000.

He explained that with no Masses being said in Laghey Barr because of a shortage of priests, the chapel was an unnecessary drain on parish funds. He would use the money from a sale to fund an extension to Laghey National School.

Fr Dagens also said he plans to place the St Colmcille's tabernacle on an altar in a side-room in St Bridget's. That would enable him to make savings on the heating bill by having week-day Masses said there during winter months.

Protesters said they are still determined to retain the Laghey Barr chapel. They are seeking further advice on the matter.

Laghey Barr Association secretary Anne Gallagher said: "We just want a chance to run the chapel ourselves and source our own priest so we can have one Mass here during the week.""

And some months later from a blog called Clerical Whispers:
"Wednesday, September 17, 2008
Priest quits as stress over church sale takes its toll

A Donegal parish priest has resigned on stress grounds in the wake of a long-running controversy over the closure of a church in his parish.
Fr Seamus Dagens, who is PP in Ballintra/Laghey tendered his shock resignation to his bishop, Dr Philip Boyce.

He said he was “frustrated” over the controversy about St Colmcille’s chapel at Laghey Barr which has not had a Sunday Mass in five years, and which he was proposing to sell.

A number of parishioners had opposed the proposal to sell the chapel, on the basis that it had been used for a weekly Mass until a year ago and was still used for rosaries and as a place of personal worship.

It is understood that weekend Masses in the small chapel were discontinued when friars in the Franciscan community at nearby Rossnowlagh withdrew their back-up service to the parish five years ago because of dwindling numbers.

Fr Dagens, who is 55, and the only priest in Ballintra parish, said the stress over the row was “beginning to accumulate”.

He said he had tendered his resignation to Dr Boyce as “things have been dragging on in terms of one thing and another and the old stress is beginning to creep up”.

“There have been demands placed on me which I simply cannot fulfil; there are many pressing things on my plate right now," he explained.

Fr Dagens admitted that he had "not given the Bishop much time to react” and added that he expected “things will begin to unravel” before long.

He defended his position on the future of the Laghey Barr chapel, saying money from the sale could be put to useful community purposes and that as it was, the little-used building was a drain on scarce parish funds.

Concern over the future of the Laghey Barr chapel escalated recently when Fr Dagens removed the tabernacle, cut off the electricity and proposed its sale to raise an estimated €100,000 towards an extension to Laghey national school.

He planned to place the tabernacle removed from St Colmcille's in a side-room in St Bridget's Church in Ballintra, which could then host weekday Masses, and thereby save on the cost of heating St Bridget’s each morning,

The Laghey Barr Community Association opposed the development and said its members would have been happy to have Mass celebrated in their out-chapel every month or two and would even try to source a priest themselves.

In an in formal ‘referendum’ held at Sunday Masses in the parish’s main church in Ballintra, Fr. Dagens had invited parishioners to indicate if they opposed the sale of the chapel by writing ‘No’ on their collection envelopes.

Only 47 people ‘voted’ against the sale of the chapel out of a total of 223 envelopes collected, thereby suggesting acquiescence in the priest’s proposal on the part of over three-quarters of parishioners.

But some opponents of the proposal claimed the ‘referendum’ was undemocratic because they have been withholding envelope contributions as a protest at the dropping of Mass in the chapel." 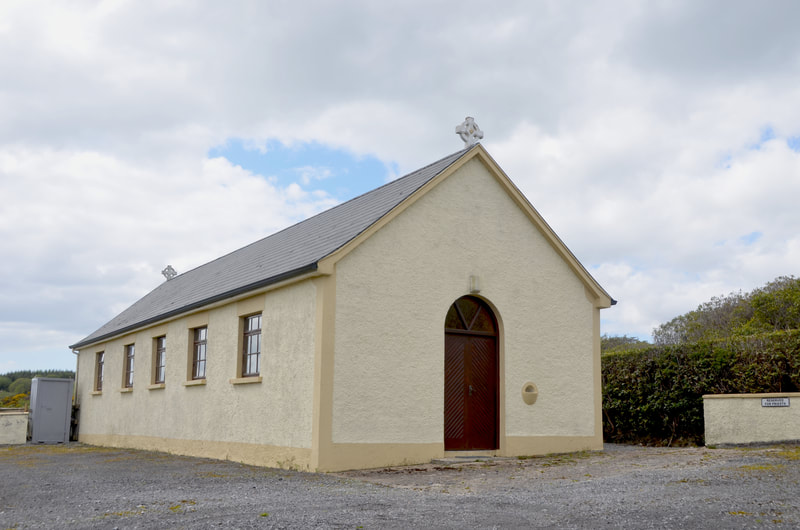 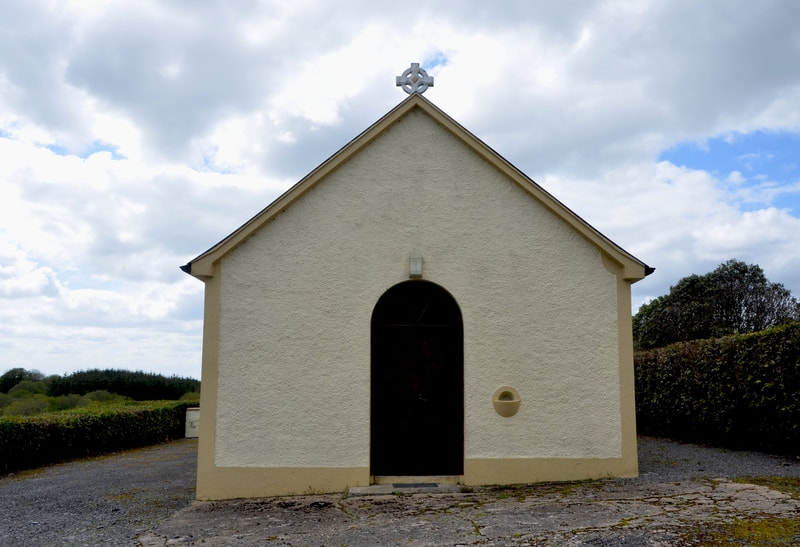 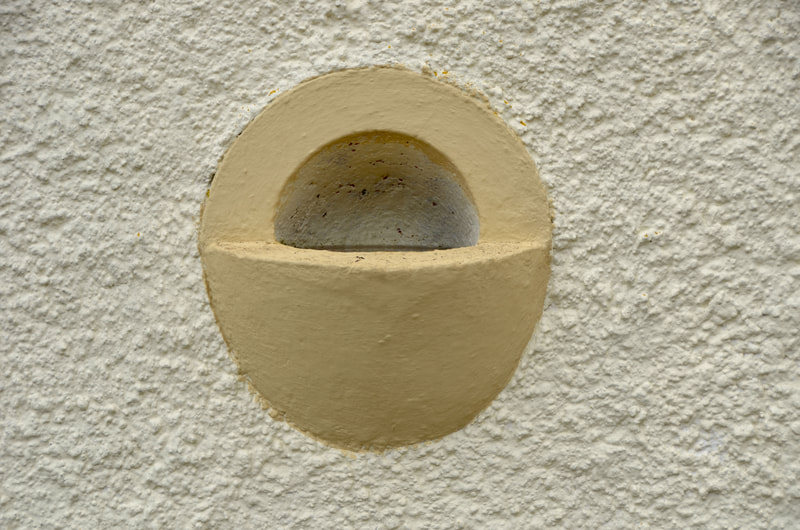 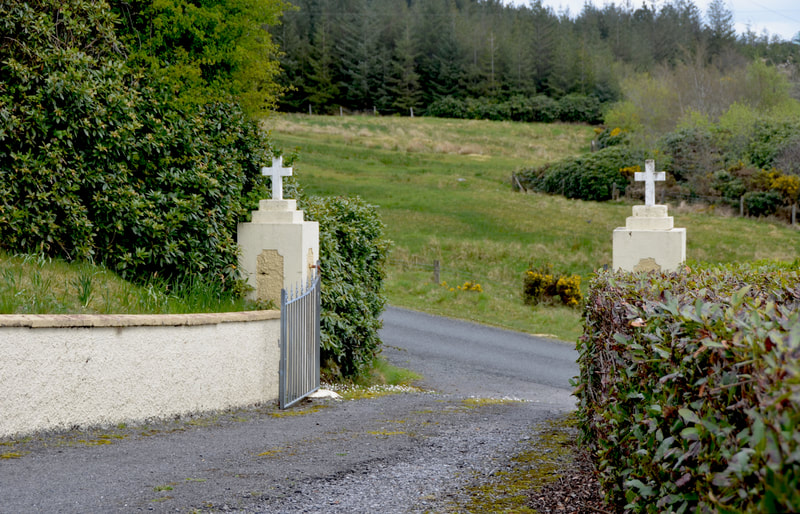 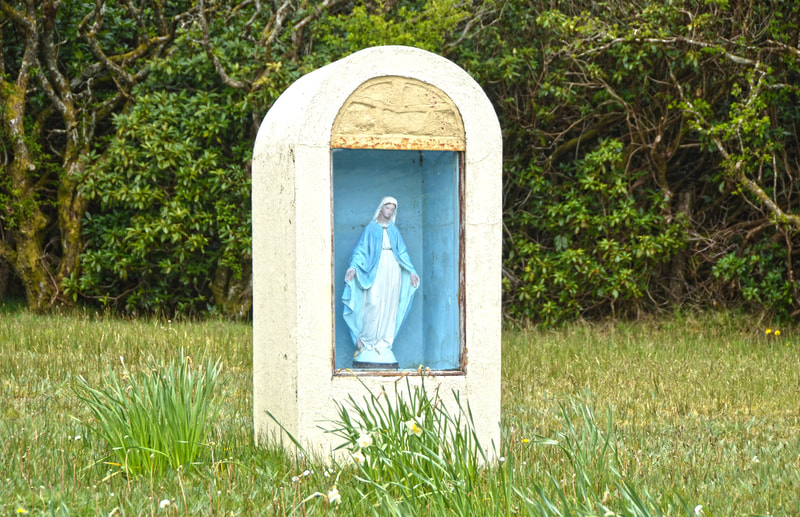 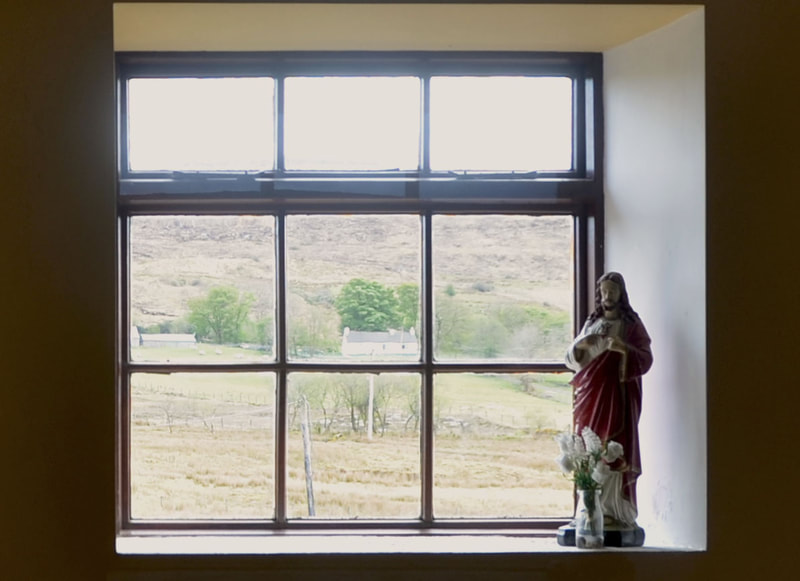 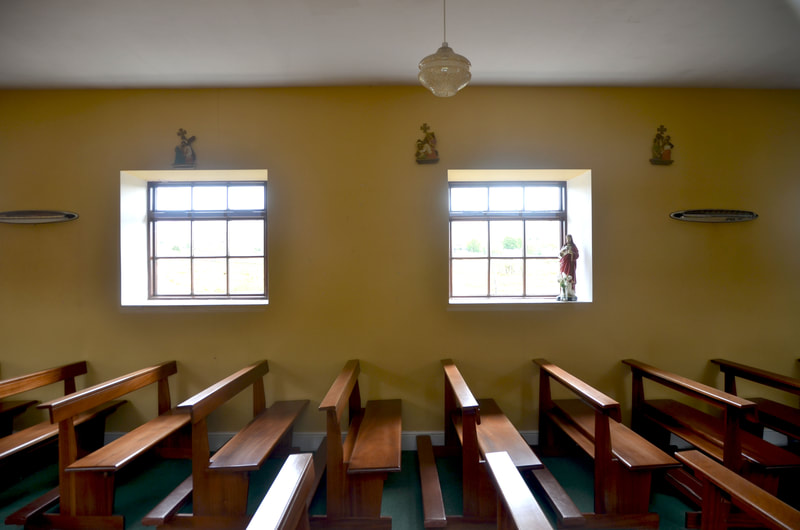 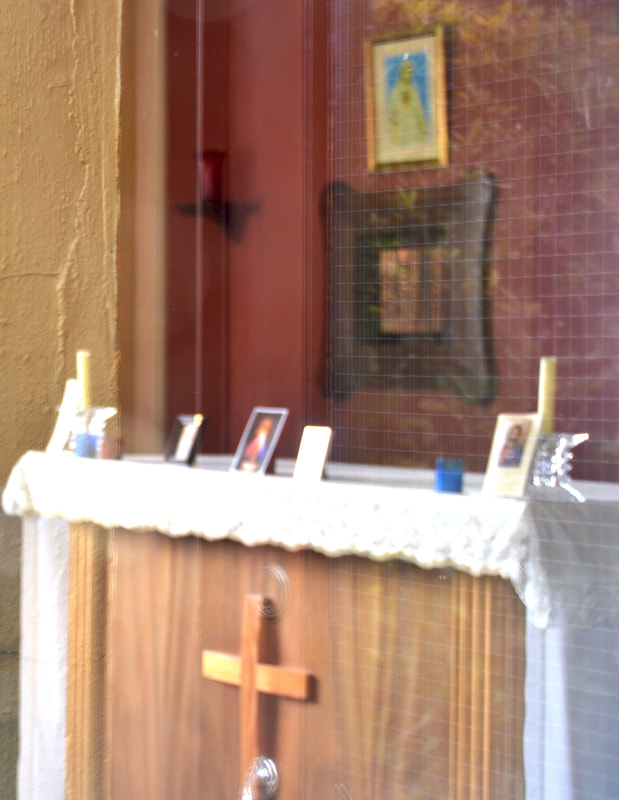 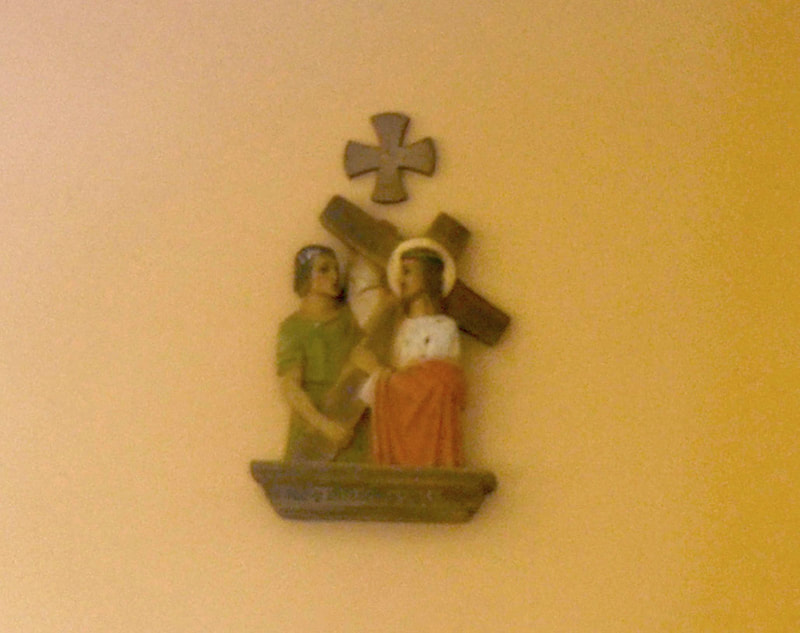 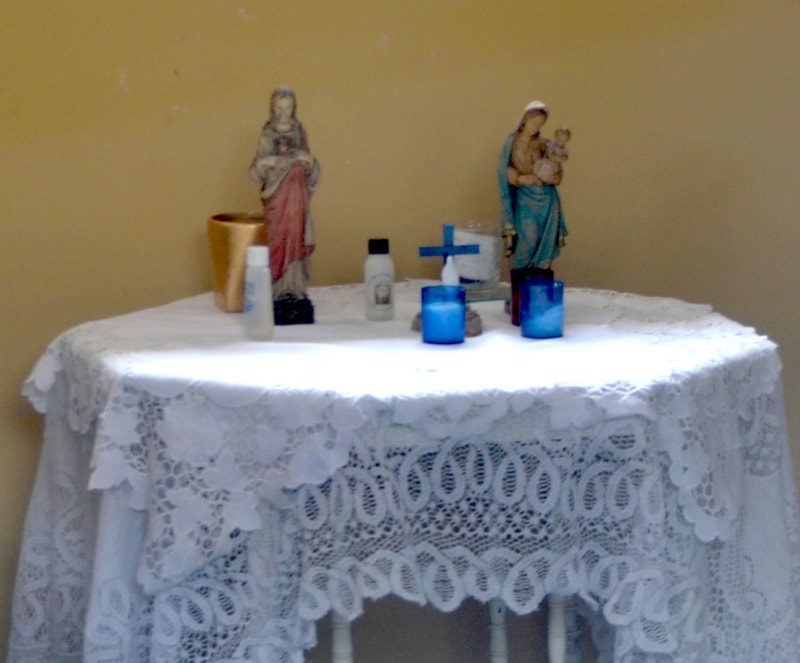 back to donegal churches and graveyards