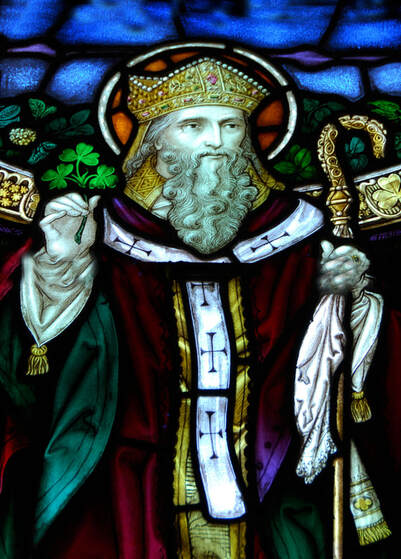 St. Patrick, (Stained glass window in St. Cartha's Church, Kilcar
ST. PATRICK
Although St. Patrick was not born in Ireland he is nonetheless inextricably linked to Ireland.  He was probably born in Britain, possibly Wales and died on the 17th of March 493 AD and is said to be buried in either Downpatrick, County Down, Ireland or Glastonbury, England, depending on which book you read.

Legend says St. Patrick cast all the snakes out of Ireland.  He is said to have stood on a hill and using a wooden staff, he drove the snakes out.  One old serpent refused to go and St. Patrick then had to use cunning to rid Ireland of this last snake.  St. Patrick made a box and invited the snake to enter but the snake insisted that the box was too small and after much debate and argument, the snake eventually entered the box to prove to St. Patrick that the box was indeed too small.  However St. Patrick quickly slammed the lid shut and cast the box into the sea thus riding Ireland of all snakes.  And to this day, outside of snakes in zoos or as pets, Ireland has no snakes 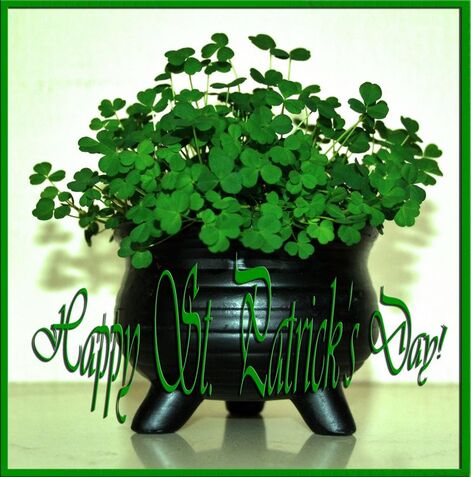 ST. PATRICK'S DAY
The 17th of March (the date of his death), St. Patrick's Day, is celebrated more or less worldwide and the day is the most celebrated saints day in the world.

There are St. Patrick's Day parades held worldwide and the first St. Patrick's Day celebration took place in a bar called the Crown & Thistle in New York City in 1756 although the event was being celebrated in a smaller way in Boston, USA since around 1737.  The day has been celebrated in Montreal, Canada since 1824.  There are also parades held in Paris, Rome, Munich, Moscow, Beijing, Honk Kong, Singapore, and Copenhagen to name a few.  In America parades have been held in the following cities since early days:

These old St. Patrick's Day postcards from our collection date from the start of the 20th century. 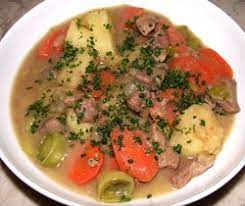 Our authentic traditional Irish stew
TRADITIONAL IRISH STEW
​There are a number of recipes for Irish Stew available but what we have tried to do here is make it as true to the original as possible.

Obviously things have changed over the years and our ancestors almost certainly would not have made a stock (see below), but then they didn't have to ~ they might not have had much but they did have something many of us can't have today and that is the freshest, totally organic ingredients right beside them.  MORE ... 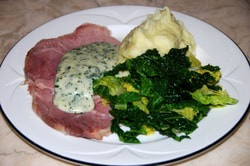 Bacon, Cabbage & Shamrock Mash
BACON AND CABBAGE AND SHAMROCK MASH
many homes across the world, particularly on St. Patrick's Day, people of Irish descent enjoy a "taste of home" ~ bacon and cabbage.  And not just outside Ireland, in 2011 cabbage and bacon was voted the most popular meal in Ireland.   MORE ...
​ 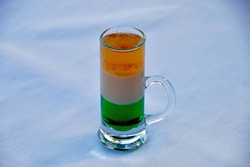 Irish Flag Cocktail
IRISH FLAG COCKTAIL
This is a cocktail that tastes very moreish but is lethal if you take too many of them!   So handle with care!  It must be downed in one to enjoy the flavour which is tastes like mint, orange chocolate.

That said, it looks very pretty and is great to serve if having say an Irish night or for an Irish celebration like St. Patrick's Day.  MORE ... 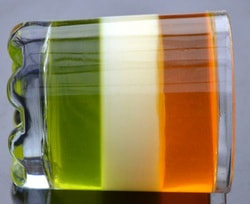 Irish Flag Jellies
IRISH FLAG JELLIES
These Irish Flag Jellies are for fun rather than learning any culinary skills ~ the only thing you will have to actually make is the white jelly.  However, to allow each layer of jelly to set, around two hours per layer, you would probably need to make them the day before they are to be eaten.    MORE ...